Burgauer’s The Road to War: Duty & Drill, Courage & Capture is based on the journals of an American WWII infantryman who landed at Normandy, was wounded and taken prisoner by the Nazis.

Some of his SF titles include The Grandfather Paradox, The Railguns of Luna, The Fornax Drive, and SKULLCAP. Other books of his include The Night of the Eleventh Sun, a Neanderthal’s first encounter with man, and The Wealth Builder’s Guide: An Investment Primer. Steven contributed to the zany, serial mystery, Naked Came the Farmer, headlined by Philip Jose Farmer.

His work has been reviewed in many places, including LOCUS, SCIENCE FICTION CHRONICLE, the PEORIA JOURNAL STAR, the EUREKA LITERARY MAGAZINE, and PROMETHEUS, the journal of the Libertarian Futurist Society.

A review of The Railguns of Luna from the prestigious SCIENCE FICTION CHRONICLE (June 2001):

Steven Burgauer writes old style science fiction in which heroes and villains are easily identified, the action is fast and furious, and the plot twists and turns uncontrollably. His newest is the story of a crack team of military specialists who discover that the brilliant but warped Cassandra Mubarak is planning to use advanced scientific devices to seize control of the world. To stop her, they must infiltrate her heavily guarded headquarters and rescue the fair maiden in distress. This is action adventure written straightforwardly and not meant to be heavily literary or provide pithy commentary on the state of humanity.
Don D’Ammassa

When Steven lived in Illinois, the State of Illinois Library included him in a select group of authors invited to the state’s Authors’ Day. He has often been a speaker and panel member at public library events and science-fiction conventions all across the country.

“Nazis” and “bayous” are two subjects which most people would not ordinarily associate together. Yet these subjects are the foundation on which Nazi Saboteurs of the Bayou are built. How did you come to put them together for this historical thriller?
It was not until I visited the National WWII Museum in New Orleans that I came to grasp the central role that city played in winning the war. The steel-ramped landing boats that made beach landings possible at Normandy and North Africa and on every Pacific island were designed and built in New Orleans by the hundreds each month and mostly with unskilled labor. While it is a well-established fact that Nazi saboteurs targeted East Coast steel mills and boat assembly yards as part of Operation Pastorius, I theorized that the Higgins boat plants might be targeted by the Nazis as well. On this premise I built the central storyline. The idea began to take shape as I studied the full-scale model of a restored Higgins boat parked in the lobby of this wonderful American museum.
Many historical novels have been written about World War II. What makes Nazi Saboteurs on the Bayou unique?
Other World War II stories, both fictional and nonfiction have been written about Nazi efforts to undermine the Allied war effort both at home and abroad. But most of the stories that take place in the U.S. focus on Operation Pastorius, where Nazi commandoes targeted manufacturing facilities in the northeast, New York, New Jersey, those areas. I believe my book to be one of the few books — if not the only one — to center the story on the Higgins boat plants in the New Orleans area. Also, while not unique, I have introduced the role of the Sicilian mob, both in the Allied war effort as preparations for the North Africa amphibious landings got underway, and their out-sized influence on the labor markets where Andrew Higgins had to find his factory workers.
Read more of this interview.

Where to find Steven Burgauer online 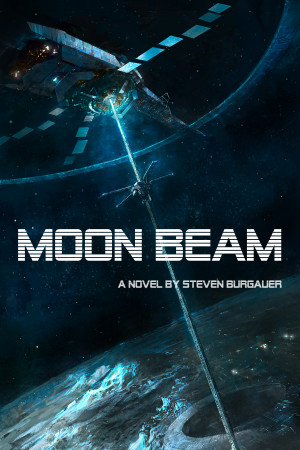 Moon Beam by Steven Burgauer
Price: $1.99 USD. Words: 83,610. Language: English. Published: April 10, 2018. Categories: Fiction » Science fiction » Hard sci-fi, Fiction » Adventure » Action
Peril stalked the corridors of the lunar habitat. The killer, a woman, fed on that fear. No one in the lunar station was safe from her wrath, not even the fresh, young team that had just arrived from Earth to erect the first lunar space elevator. The unreeling of the space cable had just begun, when the killer struck a vengeful blow, a catastrophic solar flare flashing overhead,. 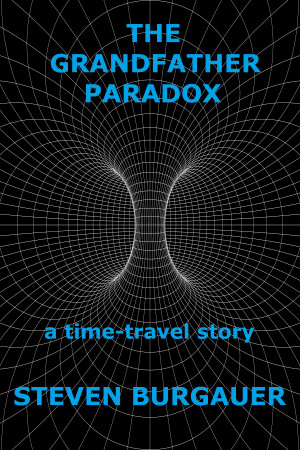 Marooned in the present, their only hope for the future lay in the past. But first there was still the small matter of staying alive. The planet was crawling with bird-beasts, large parrotlike carnivores. Now join Andu Nehrengel and his female clone companions on an intense voyage through time. First stop: the Civil War and the Battle of Shiloh. Meet Mark Twain when he is still a river boat pilot. 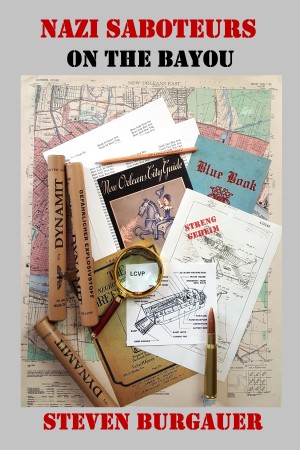 A dead German in a whorehouse bed. A pair of bloated corpses floating in a Mississippi bayou. A mysterious notebook filled with unknown codes and hand drawn maps. A Mafia Don helping the Allies seek revenge on the Fascists. A series of anagrams challenging the code-breaking talents of the brilliant minds at Bletchley Park. A Nazi plot to sabotage the production of Higgins landing craft.

You have subscribed to alerts for Steven Burgauer.

You have been added to Steven Burgauer's favorite list.

You can also sign-up to receive email notifications whenever Steven Burgauer releases a new book.