Raised by an inventor and an English major, Rebecca Goodrich jettisoned the glitter of California to build a houseboat in Dutch Harbor, Alaska, home of The Deadliest Catch. Now in Anchorage, Alaska, Goodrich is a consulting editor active in the literary community. She has won awards for essay, haiku, free verse, radio commentary, and short story. Goodrich's work is in two anthologies: Between Two Rivers, and Cold Flashes: Literary Snapshots of Alaska, published by University of Alaska Press.

Creator of The Book Pusher column, her many book reviews have appeared in F Magazine, Ester Republic, Alaska Tidbits and Make-A-Scene.She was a radio stringer for KDLG while in Unalaska, and a journalist and columnist for The Dutch Harbor Fisherman newspaper. Other journalism and work has appeared in Alaska Journal of Commerce, Alaska Home, Anchorage Daily News, Alaska Business Monthly, Alaska's Best Kitchens, Alaska Women Speak, and Anchorage Chronicle.

In California, Goodrich had poetry published in many small literary mags, as well as memoir in Easy Reader and Sacramento News & Review.

Where to find Rebecca A. Goodrich online 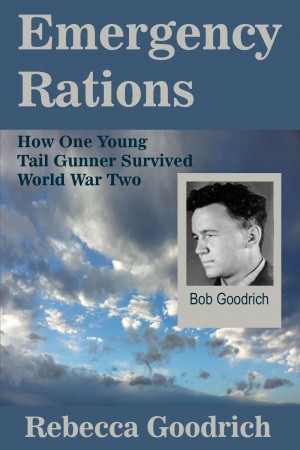 Emergency Rations: How One Young Tail Gunner Survived World War Two by Rebecca A. Goodrich
Price: $0.99 USD. Words: 2,400. Language: English. Published: August 28, 2015. Categories: Nonfiction » History » War
In 1943, Robert Stewart Goodrich tries to enlist in the Air Force to fight the Nazi onslaught. Rejected due to irregular heartbeat, he gets his father, an Air Force Colonel, to pull strings and get him in anyway. Bob, as tail gunner in the B-17 Flying Fortress, can expect to live through perhaps only a dozen missions. Bob endures 35 missions, and shares what he learned in order to survive.

You have subscribed to Smashwords Alerts new release notifications for Rebecca A. Goodrich.

You have been added to Rebecca A. Goodrich's favorite list.

You can also sign-up to receive email notifications whenever Rebecca A. Goodrich releases a new book.