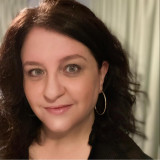 Sharon Ede is a sustainability professional from Adelaide, South Australia, who has had over 25 years of both grassroots and government experience in sustainability-related roles, from research and policy to communication and behaviour change, as a writer, speaker and activist.

A lifelong writer, this is her first work of fiction, inspired by the ideas of two colleagues, one of whom she never met in person. Sharon has advocated for the use of storytelling and narrative in her work for years, and eventually decided to write the book she'd been waiting for herself!

When did you first start writing?
I've been writing - creative writing - since I was a kid, but after I hit university and work, most of my writing has been about communicating ideas and information. This is my first proper fiction book! I wrote it because I wanted to share a lot of ideas and things I had learned with others, and give them a story that they would enjoy, but also make them curious. Stories have a way of sticking with people in a way that conveying information in a factual way does not, so I figured I would wrap up many things I wanted to share with an audience in a good yarn.
What's the story behind your latest book?
The inspiration for the book originally came from Professor Bill Rees at the University of British Colombia in Vancouver, whose work on ecological footprint and overshoot I first encountered in 1994. Years later, in the mid 2000s, Bill had written a draft of a paper called 'Is Humanity Fatally Successful?' which he shared with me. The idea intrigued me, and the notion of whether humanity may have an inherent propensity to bring about our own downfall, and was it cultural or was it possibly even genetic became the main focus of the plot - but something was missing.

The corollary to the question is: 'if so, what can we do about it?' And there are plenty of things we can do about it, but given the scale of the impacts we've had, the response since the 1992 Rio Summit isn't exactly commensurate. And I think it was biologist Paul Ehrlich some years back, just as MAHB was formed (Millennium Alliance for Humanity and the Biosphere*) who asked a question to the effect of: given the reams of scientific evidence we have, why aren't we getting an appropriate political response? There was also the quote from environmental lawyer Gus Speth, founder of the World Resources Institute and Natural Resources Defense Council:

'I used to think that top environmental problems were biodiversity loss, ecosystem collapse and climate change. I thought that thirty years of good science could address these problems. I was wrong. The top environmental problems are selfishness, greed and apathy, and to deal with these we need a cultural and spiritual transformation. And we scientists don’t know how to do that.'

So, I wondered, who can help our scientists?

I was reading a lot about storytelling, how it impacts people differently, and learning from a range of colleagues, including one who was involved with making 'An Inconvenient Truth' when he was working for Jeff Skoll's Participant Media. There had been a lot written about climate change prior to that film - I myself was writing fact sheets on an old Mac Classic back in 1993 when I was at university - but it was the movie that really moved the needle in terms of both consciousness and policy response.

Then I got involved in an online group of activists from which emerged the Post Growth Institute www.postgrowth.org, which I helped establish in 2010-11 (initiated by an Australian, now headquartered in Oregon, US). One of the people I encountered, but never met, was Professor Andrew Wilford of Bond University in Queensland. He had written a paper called 'Spaceship Earth Mission Assurance' which mashed up the concept of 'spaceship earth' popularised by Buckminster Fuller with his 'mission critical' approach from his engineering and aviation background**. This paper gave me the idea of the main plot focus in the book, and also the acronym which became its title. 'Mage' is not a word, it is an acronym: 'MAGE'. Wilf is sadly no longer with us, he died too young in 2012. He was such a big inspiration that I ensured he had a presence as a character in the book. I wish he had had a chance to read this book.

I figured I would write a story I would want to read that addressed all of this, while also sparking imaginations, bringing a bit of what we all enjoyed in our childhood reading into it, and leaving an audience thinking about the ideas and themes long after they finish the book.

* An initiative of Stanford University, bringing the best science to civil society (originally the Millennium Assessment of Human Behavior')

** https://transitionvoice.com/2011/06/mission-critical/
Read more of this interview.

Where to find Sharon Ede online 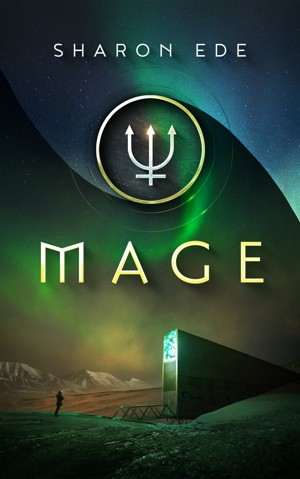 Mage by Sharon Ede
Price: $3.99 USD. Words: 65,670. Language: English. Published: December 29, 2021. Categories: Fiction » Adventure » Action, Fiction » Adventure » General
When disaster survivor Ambra Lightstone is confronted by an otherworldly stranger, she is set on a collision course with the vengeful heir of a hidden civilisation, and must prevent him from unleashing a terrible force that will change the face of the earth - and to safeguard a technology that could save it. MAGE is a Silver Award winner in the 2020 Nautilus Book Awards (Self Published).

You have subscribed to alerts for Sharon Ede.

You have been added to Sharon Ede's favorite list.

You can also sign-up to receive email notifications whenever Sharon Ede releases a new book.