Born to Polish Jew parents, Simon grew up in Paris, France in the turmoil of the Nazi occupation during World War II. Thrown in jail at ten years old with his sister, then released later by an Italian car mechanic, he finally reached the Free Zone crawling across mountains and dangers to simply await the utopic, and seemingly unattainable end of the war. Less than ten years later, he was drafted in the Algerian war, scouting for propaganda news and writing reports for the Intelligence Department.
With an innate taste for designing fashion clothes, he mastered the art of pattern-making with Pierre Balmain and Yves St Laurent to later establish an international fashion design company based in Thailand where he would spend ten happy years of his life.

1n 1984, an economical downturn around the world forced him to embark in another journey: the boat to “The Americas”. The discovery of new horizons fed his hungry spirit for adventure
at 52. The language barrier was a bit frightening but he tackled the problem by absorbing the then-popular-Assimil Method during the voyage, for he could not bear the thought of not addressing the immigration officer in his or her native tongue. And he did, with almost patriotic pride. The journey began in Texas where he would design clothes lines for local flea market goers in the outskirts of Houston, or organize “fashion shows” by the swimming pool of middle-class apartment complexes hoping to attract more than just the bored, or the curious eye. In vain.
It took no more than two years for the gates of the fashion cradle to open to his craft. New York City. But a grave and unfortunate family accident abruptly interrupted his new path after just a few years.
Simon’s next chapter would later open in St Petersburg. Russia would have been romantic, but it was Florida where he continued to shine while dressing up the rich and famous like Barbara Bush and Ivana Trump, among others. Yet, something was missing. Or boiling. A passion for “The Law” accompanied with a fire for debate, compelled him to seek refuge in the books of law, which earned him a paralegal degree Cum Laude at 65 with a GPA he shared with the top 1% student nationwide.

But it is a self-induced knowledge of history, strangely accurate vision of international politics, and a desperate desire to share (or warn of) the intricacies of conspiracy theories that paved the road to the current chapter of his life. The one he wished had been the first. His age may have shadowed the political aspirations boiling on the inside, so he began to write and never lost hope, nor courage. White Lies sprung out of a conversation throughout which I saw the plot unravel and solidify after each passing minute. The next morning, he told me the story had to be completed at least four months before the Presidential elections.
He wrote the novel in thirty days.

If we learned one thing from Simon’s story it is that it’s never too late to pursue one’s dream. That is why I am so proud I am able to share this chapter with my father.
Arno Agmann

Where to find Simon Agmann online 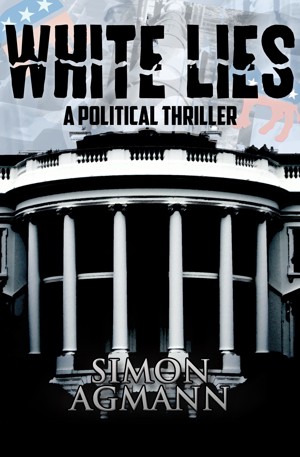 You have subscribed to alerts for Simon Agmann.

You have been added to Simon Agmann's favorite list.

You can also sign-up to receive email notifications whenever Simon Agmann releases a new book.