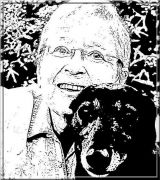 When I retired after a long working life - I knew that I didn't want to do 'as little as possible.' I started to grow a small house renovation business for a while but once the recession came, I didn't want to continue with the business. I decided to become involved with a small local charity called Kerry Greyhounds UK and began to foster and adopt greyhounds. The women that ran the charity worked incredibly hard to save Irish greyhounds from the bullet. They ran their homes and families and on a fortnightly basis travelled from the East of England to Ireland to collect four or five dogs to bring them to safety and to find homes for them.
One day Misty, a three legged dog scuttled down the garden path and into our lives. She was a wonderful dog and somehow an idea sparked in my head - I could write a novel with Misty, or Maisie, as we renamed her as the central character. Any money that I made could be donated to the charity. A couple of years later the book was published. Maisie didn't live long enough to see her book in print but her poise and beauty live on through the book - The Mystical Life of the Dog with Three Legs.
I have now published five books - in print and electronically. The Giant Stories Books One and Two and The Scary Giant Stories are fully illustrated by me as I couldn't afford to pay for an illustrator. When I look at the illustrations I cannot believe that I produced them as I've never done art work before. In total, there are fifty four, illustrated giant stories of about seventy five thousand words in total. I should mention that I am registered as a blind person with very little sight in one eye only.
At the moment I am working on two crime novels, one of which will be published in the latter part of 2014.
I am really enjoying my 'retirement,' which is just as well because writing and trying to market the books will take me until I'm 'quite old!' Who want s to do nothing anyway?

Where to find Emma Greyling online 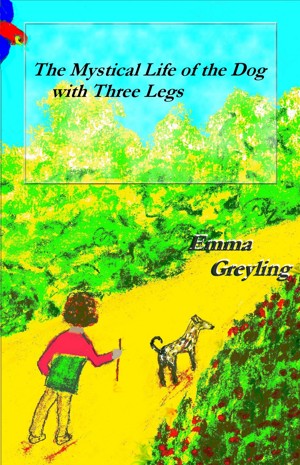 The Mystical Life of the Dog with Three Legs by Emma Greyling
Price: $2.00 USD. Words: 77,390. Language: English. Published: April 11, 2014. Categories: Fiction » Children’s books » Animals / Dinosaurs & Prehistoric Creatures, Fiction » Fantasy » Contemporary
An adventure story set in the modern day but with a historical context. The four main characters risk life and limb as they seek out the truth behind the death of a sixteenth century Knight who has been misrepresented by historians.

You have subscribed to alerts for Emma Greyling.

You have been added to Emma Greyling's favorite list.

You can also sign-up to receive email notifications whenever Emma Greyling releases a new book.