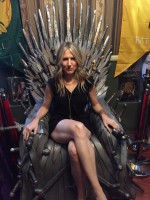 Darkness Of Light (Darkness Series, book #1)
Between Light and Dark, Ember finds a world where truth and knowledge are power and no one can be trusted. But her survival depends on finding out the truth about herself. Once the truth is out, however, there will be no going back. And she'll definitely wish she could.

FIRE IN THE DARKNESS (Darkness Series #2)
It's been four weeks since Ember Brycin witnessed what her powers are capable of. Those people who were unable to escape either turned quickly into gangs or live in shelters. Ember, on the other hand, can't do either. With a price on her head and a Dark Dweller on her ass, she is constantly on the move. Both Light and Dark are hunting her for their own purpose to use her as a weapon or a pawn in the war between the Unseelie King of the Dark and the Seelie Queen of the Light.

DWELLERS OF DARKNESS (Darkness Series, #3)
Some days feel like years, but in Ember Brycin's case just the opposite is true. She had only been in the Otherworld for a day or two when she returned back to the Earth's realm. But it is three years later on Earth. Em is now 22. It would matter if she was human, but she's not. She is a Dae, part Demon and part Fay, with a little Dark Dweller thrown in to make her even more of a freak.

You have subscribed to alerts for Stacey Marie Brown.

You have been added to Stacey Marie Brown's favorite list.

You can also sign-up to receive email notifications whenever Stacey Marie Brown releases a new book.