Sid Tafler is a career professional writer, author of Us and Them: A Memoir of Tribes and Tribulations and more than 3,000 articles published in Canada, the U.S. and the U.K. He has won a dozen writing prizes, including a Western Magazine Award for an article about a 10,000-year old Caucasoid skeleton uncovered in Washington State. He has also worked as a publicist, an editor, a playwright and a writing instructor. Tafler has edited and contributed to several other books, including The Uncooling of America (William Morrow), Child Growth and Development (Dushkin/McGraw Hill) and The Encyclopedia of British Columbia (Harbour Publishing). As a journalist, he has written for more than 50 publications as a contributor or columnist, including The Globe and Mail, National Post, New York Times, Wall Street Journal, Maclean’s and Report on Business Magazine.
His next book, Great Bear Mountain, is a novel about the meeting of two human species in France 30,000 years ago, and the choices they must make between love and acceptance or hatred and war.

Why did you write Us and Them?
I wrote this book because it seems like how much of the world works. People still go to war over ethnic or religious hatred, and even in peaceful countries, those who look or speak differently often face intolerance or worse. My own experience growing up Jewish in Montreal, a city perhaps unique in North America in its multiple identities, sheds light on this experience. The book looks back more than 100 years since my family emigrated to Canada, so it shows how society has changed, generally become more tolerant and accepting. This is an unending struggle, as racism still exists in various forms, sometimes hidden away in corners and dark places, perhaps more dangerous than when it was more overt.
Do you remember the first story you ever wrote?
I wrote a poem for my mother called Fragments of a Rainbow when I was about eight years old. It was about the beautiful maple leaves scattered on the ground in Montreal in the fall.
Read more of this interview.

Where to find Sid Tafler online 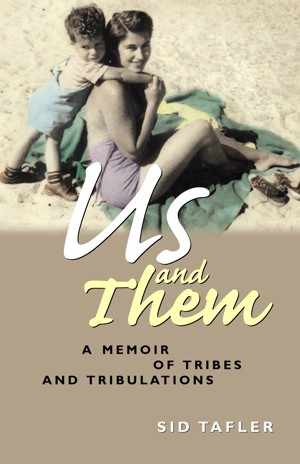 Us and Them by Sid Tafler
Price: $8.99 USD. Words: 56,020. Language: English. Published: September 23, 2013. Categories: Nonfiction » Biography » Autobiographies & Memoirs, Nonfiction » Biography » Editors, journalists, & publishers
Did you ever feel your face prickle under the hostile gaze of a stranger? Us and Them is a vivid memoir for anyone who ever feared or mistrusted another person because of their skin color, their religion or the language they spoke--or faced that fear and suspicion. "Graceful, lucid writing." Vancouver Sun "Told with skill and sensitivity." Victoria Times Colonist

You have subscribed to Smashwords Alerts new release notifications for Sid Tafler.

You have been added to Sid Tafler's favorite list.

You can also sign-up to receive email notifications whenever Sid Tafler releases a new book.