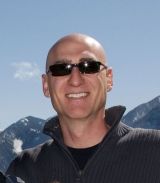 JAY MAGIDSON WAS BORN in Southern California in the same year Alaska & Hawaii joined the union. He now lives in a rural area not too far from Aspen, Colorado. He is married with two children. Jay lives in a world of art and artists. His wife is a successful artist and he owned and managed art galleries for more than three decades. Jay’s weekly art essays were published to reader acclaim in The Aspen Daily News and The Roaring Fork Sunday. He was also a guest writer for The Aspen Sojourner Magazine.
"Threshold of the Mind" is Jay’s third book. His first book, "Shira’s Wish," a children’s book with photographs by award winning photographer, Bobbie Goodrich was released in 2011. It is being widely hailed by young readers.

"Colors," his second book, is a collection of dark short stories that was released in 2012. Kirkus Review wrote: “This eerie novella in stories recalls Rod Serling’s Twilight Zone.” And Kathryn Rabinow, Professor of Psychology at the University of Houston wrote: “Oh wow!!! Oh my!!! I couldn’t put the book down; at times I couldn’t stop my pulse from racing; at times I wanted to rush to your house and take away all pills and sharp knives from your cupboards and drawers.”
Science Fiction has long been Jay’s love, to read it and to write it. Science Fiction is the last bastion of the dreamer, where an idea becomes reality. It is no accident that so many films and Television shows are based on Science Fiction stories. As long as we have imagination, these stories will continue to intrigue and inspire us.
To learn more about the author go to: http://www.JayMagidson.com

Video promo of "Threshold of the Mind" on Youtube: http://www.youtube.com/watch?v=ZTHPrEY0NAI

Fiction by Jay Magidson:
Threshold of the Mind
Colors, A Novel in Stories
Shira’s Wish, with photographs by Bobbie Goodrich
The Crystalline Sword

Where to find Jay Magidson online

You have subscribed to Smashwords Alerts new release notifications for Jay Magidson.

You have been added to Jay Magidson's favorite list.

You can also sign-up to receive email notifications whenever Jay Magidson releases a new book.