Susan Jean Ricci and her husband Joe live in a lovely New Jersey town near the sea. Together they have seven children and ten grandchildren.
An award-winning, internationally read, From Womens Pens author and humorist, Susan is best known for her series of works titled Cindy's Crusades that includes two novels, Dinosaurs and Cherry Stems and The Sugar Ticket, the short chronicle Twilight and Chickadees, and a collection of short stories titled Heart Marks the Spot.
Susan's novel Dinosaurs and Cherry Stems is a Multi Award winner, earning a Bronze in the Global EBooks Contest for Romance/Erotica, and a Bronze in the Readers Favorite Contest for Humor. Dinosaurs was also a finalist in the Independent Author Network contest for Outstanding First Novel.
Its Sequel The Sugar Ticket placed first in the Outstanding Women's Fiction category in the IAN 2016 and My Sexy Chef won a Silver second place in the novella category of the Global Ebook Awards 2016.
Her short stories A Super Sandy Christmas and Two Miracles for Christmas appear in Annie Acorns 2014 Christmas Treasury, and are also sold as stand alones. Her short story The Christmas Cardinal appeared in Annie Acorns 2015 Christmas Treasury and can also be purchased separately. A Valentine's Day to Remember can be read as a stand alone short, or can be found in Annie Acorns 2015 Valentine's Day Treasury.
Her latest romance Falling For Niagara can be purchased separately, and is also included in Annie Acorn's 2016 Romance Treasury.
Susan is currently penning a new series of Blush novellas. My Sexy Chef is the first novella in the Chef series, followed by the sequel Chaos in the Kitchen. The third novella in this series is called Turning Up the Heat and will be published later this year.
Susan blogs at http://www.susanjeanricci.com. You can friend her at facebook.com/DinosaursCherryStems, and you can follow her at @Susanjeanricci. Her books are available on Amazon, Barnes and Noble, Kobo, and iTunes. 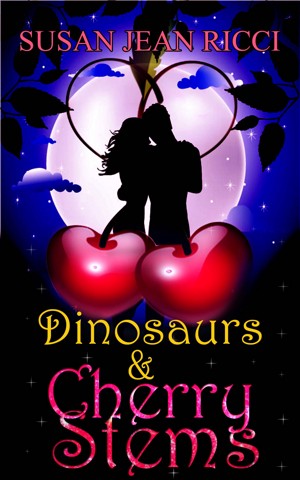 Twice divorced, cynical Cindy Layton feels like a relic with prehistoric baggage, and doubts she can muster the courage to establish a new relationship again. Her journy out of the Stone Age hits hilarious turbulence when she joins an internet dating service. The weirdoes and scammers she meets in cyberspace almost sent her back into her cave, as she tries to conquer mid-life adolescence.

You have subscribed to alerts for Susan Jean Ricci.

You have been added to Susan Jean Ricci's favorite list.

You can also sign-up to receive email notifications whenever Susan Jean Ricci releases a new book.