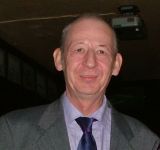 Terry Waldron was born in the small village of Minety in 1948 and like many children of that era had the obligatory Hornby clockwork train set. The initial fascination for love of steam came from travelling between the village and Swindon regularly on a Saturday either for shopping or to support Swindon Town FC.


Like many boys of that time he wanted to work on the railway, preferably as a train driver, this was not to be so as steam was in its decline as was the works at Swindon.
He almost always had some form of train set or model railway, even though this was not avidly pursued during the early years of marriage. But this was further pursued in modelling in O Gauge for many years.
His first ventures into research was to assist Paul Burkhalter for his book on Devonport Dockyard Railway. This was followed by carrying out research into canal boats that were part of the Ellesmere Port Boat Museum collection.

You have subscribed to alerts for Terry Waldron.

You have been added to Terry Waldron's favorite list.

You can also sign-up to receive email notifications whenever Terry Waldron releases a new book.