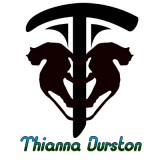 Thianna D. is a writer by day and supernova by night. Or at least that’s what the faeries tell her. And who is she to deny those pesky *cough* lovely little creatures?

She lives in the Pacific Northwest, though her heart belongs elsewhere. In the meantime, until she can return to the place she calls home, she happily lives in a city that still thinks it’s a small town. Thankfully, it has given her muse lots of amusing places to start a story.

She is the M/F Romance with a hint of spice side of A Thia Thing.

Where to find Thianna D online

You have subscribed to alerts for Thianna D.

You have been added to Thianna D's favorite list.

You can also sign-up to receive email notifications whenever Thianna D releases a new book.