The author is a practising solicitor in north London. He utilises his skills to forensically dissect the scriptural texts to show what is really written in the holy books of Hinduism. Having survived a heart attack in his mid forties, he committed himself to reading the scriptures and this is a tale of a search that has ended in intellectual and spiritual liberation. He enjoys reading, football, cycling and playing with his chocolate labrador.

What made you write Aum Beep Beep?
Having read rational critiques of the Abrahamic religions by authors like Sam Harris, Christopher Hitchens and Richard Dawkins I became aware that there were very few critiques on my own religion, Hinduism. The criticisms which existed were also mainly confined to academic type works that would ordinarily never see the outside of a university library archive. So I decided to read the available scriptures of Hinduism and what I read horrified me so much that I decided to put pen to paper and came up with Aum Beep Beep

This book is unique, for while both radical Islam and fundamentalist Christianity have received many adverse commentaries, Hinduism has largely been seen to be "tolerant" and "peaceful". This book is a refreshing antidote to those pervasive accolades and elucidates the tropes that justify immoral and unethical stands.

People who have already read the book have described it as heartfelt, powerful, educative, fascinating, full of personal conviction, irreverent, passionate and hilarious.
What's the story behind your latest book?
Aum Beep Beep is both a rational critique of Hinduism and an indictment of the caste system.

The book starts off with my quest to discover the hidden secrets of Hinduism and delves into the history of the Indo Aryans, goes into the beginnings of Hinduism, outlines the theory of creation as depicted in the Vedas and describes the animal sacrifices and element worship which made up most of the Vedas. It then examines the later writings of the Puranas and then goes on to examine the very questionable ethics and morality of the Gita. Throughout the book caste injustices are brought to the fore to show how the religion was doctored to suit the interests of the preservation of caste hierarchy (the Brahmins).

The final part of the book looks at the effects of Hinduism on modern India- how the concept of “Hindutva”( Hindu nationalism) is seeping into the pores of Indian politics and how this is potentially a very dangerous development for India with personal freedoms in danger of being put at risk and text books on history being doctored to suit the Hindutva agenda.
Read more of this interview.

Where to find Vipul Trivedi online 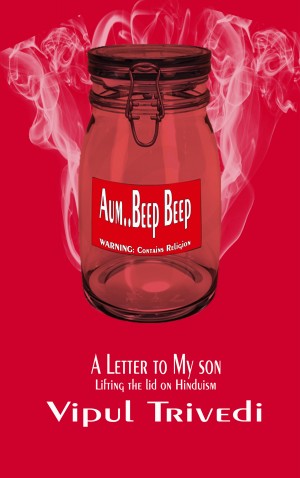 Aum Beep Beep:Lifting The Lid On Hinduism by Vipul Trivedi
Price: Free! Words: 99,120. Language: British English. Published: August 4, 2014. Categories: Nonfiction » Religion & Spirituality » Atheism/Agnosticism, Nonfiction » Religion & Spirituality » Hinduism
Aum Beep Beep tells the true story of Hinduism. This irreverent, controversial and hilarious book charts the author's journey from belief to disillusionment as he begins to understand the truth behind the much lauded scriptures of Hinduism. This rational critique provides a refreshing antidote to those pervasive accolades and reveals the shocking truth about the origins of Hinduism.

You have subscribed to alerts for Vipul Trivedi.

You have been added to Vipul Trivedi's favorite list.

You can also sign-up to receive email notifications whenever Vipul Trivedi releases a new book.