Sarah R. Yoffa is a Mechanical Engineer and has been an actual Rocket Scientist but her first love is writing. She abandoned a career in IT Management to pursue a career in publishing just as the Digital Publishing Age was dawning.

Sarah was raised in a traditional Jewish home but left organized religion behind for most of her adult life. In a miraculous stroke of Divine Intervention, Sarah was led back to God and her Jewish roots by Evangelical Christians at the Faith Fellowship Church (EFCA) in central Florida. She didn’t convert but learned from them how to have a personal relationship with God. Her Jewish God.

In the late 1990s, Sarah simultaneously attended both Faith Fellowship and Chabad of the Space Coast, rediscovering what it meant to be Jewish--and sharing that knowledge through Bible study classes in both congregations! By communicating between the two, Sarah was like a “bridge” between them, translating what words cannot convey. Sarah continues to connect with believers of all faiths--and non-believers who seek answers.

Sarah made Aliyah (emigrated to Israel) in 1999, and it was the best decision she ever made! Unfortunately, the financial collapse in the wake of 9/11 necessitated her return to the U.S. Sarah’s dream is to return to The Land and retire in Arad, Israel, where she can get up to have a cup of coffee with God in the Holy Desert and write all day--except, of course, on Shabbat! 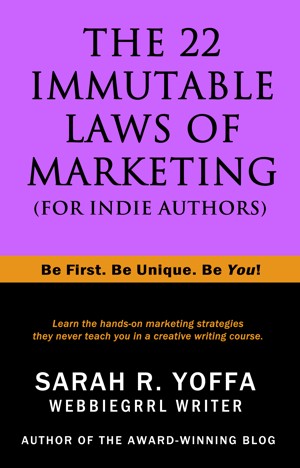 In The 22 Immutable Laws of Marketing (for Indie Authors), Sarah R. Yoffa adapts marketing strategies from automobiles and breakfast cereals to the unique challenges of the Indie Author in the Digital Publishing Industry. This book reworks the classic concepts introduced in the 1990s by Al Ries in his book of a similar title but these immutable laws are specifically tailored to Indie Authors. 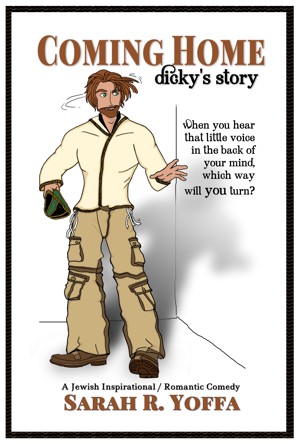 Coming Home (Dicky's Story) by Sarah R. Yoffa
Price: $5.99 USD. Words: 183,160. Language: English. Published: November 6, 2010. Categories: Fiction » Romance » General, Fiction » Cultural & ethnic themes » Jewish
(5.00 from 8 reviews)
NaNoWriMo 2010 book. Last updated 2010-11-29 06:09:06
They say when God closes a door, He opens a window, so what do you do when the ceiling comes crashing down on you? This inspirational story of a secular man's faith walk is improved by the fact it's wrapped around a heart-warmingly sweet, side-splittingly funny love story. The Romantic Comedy outshines the faith walk at times, but isn't our love for each other a gift from the Almighty?

You have subscribed to Smashwords Alerts new release notifications for Sarah R. Yoffa.

You have been added to Sarah R. Yoffa's favorite list.

You can also sign-up to receive email notifications whenever Sarah R. Yoffa releases a new book.