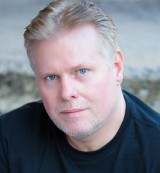 Born on the shores of Lake Michigan north of Chicago, Illinois, as a boy Will was more at home on the beaches, local playing fields or exploring the woods behind his house than in a classroom. Precocious and free-spirited, he was given to the rough and tumble of sports and other physical activities.

All this changed the day he discovered what he would later call--"the magic book; the first book that made the movie go in my head"-- J.R.R. Tolkien's The Hobbit. Devouring it, the Lord of the Rings and later The Silmarillion in consecutive readings, his life-long love of fantasy and poetry began.

During his high school years, now an avid reader, Will became a student of science fiction/fantasy, mythology and folklore and would seek out similar works by Robert A. Heinlein, Frank Herbert, Roger Zelazny, Marion Zimmer Bradley and Stephen R. Donaldson. Graduating from college with honors, he received his first awards in the genres of poetry and short fiction while, all the while, his own fantasy world was slowly taking shape in his imagination.

In 1988 surrounded by family and friends he married the love of his life, rock singer and part-time journalist for the Soho Weekly News, Kelly Andersen. Together they have three wonderful children, Shae, Erin and Erik. While Will wrote, Kelly went on to a long successful third career as a restaurateur and is currently a sought-after health and lifestyle coach.

Throughout his writing life, Will has always considered himself a poet having written seven books of poetry along with a number of short stories, three movie scripts and an Off Broadway play. At the same time, like some model train enthusiast lovingly shaping an H0 scale paradise in his basement, he was tinkering obsessively with his fantasy world which presented first as hastily written notes in a journal; these scratchings would later become notebooks and then computer files filled with detailed histories, maps, poetry, character sketches and stories.

Twenty-two years after that first note was taken, he decided to pull it all together and began Godsfade, a high science fiction/fantasy series set in a dystopian future, The Living Gods, Awakening in the Hollow and The Dark Gate being the first three installments.

What is your latest book?
The Dark Gate. It’s the final book in a high fantasy trilogy, Godsfade.
Is your recent book part of a series?
It is. The series is called, Godsfade. I wrote it under the name, W.M. Driscoll. It’s not really about gods; name’s more ironic than descriptive. It *is* about all sorts of fantastic events and people though. I see it as a nine-book series, a trilogy of trilogies. The first three books in the set, The Living Gods, Awakening in the Hollow and The Dark Gate, are finished. The next two trilogies, Godsfade Ascendant and Godsfade Rebirth are still in the workshop getting their wheels put on.
Read more of this interview.

Where to find W.M. Driscoll online 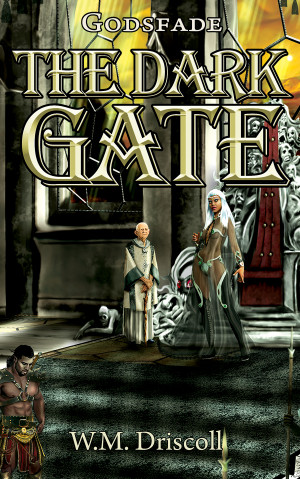 The Dark Gate (Godsfade #3) by W.M. Driscoll
Price: $5.95 USD. Words: 181,990. Language: English. Published: February 17, 2017. Categories: Fiction » Fantasy » Epic, Fiction » Science fiction » General
Ketri and Tome, now separated by a vast ocean, race headlong into trials and terrors that are beyond their understanding. The Council in Eranos, and the Loraan Protector, have declared that the rebel Aeons must be dealt with, and have sent dark forces to ensure their destruction. 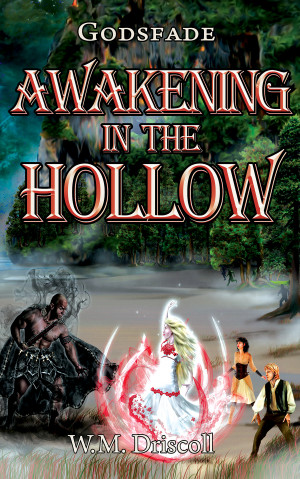 Awakening in the Hollow (Godsfade #2) by W.M. Driscoll
Price: $5.95 USD. Words: 124,280. Language: English. Published: February 13, 2017. Categories: Fiction » Fantasy » Epic, Fiction » Science fiction » General
Brought to the dusty catacombs beneath the city of Lee, Ketri and Tome are forced to retell the tale of their frantic and often bloody flight through the forest. Sa Makiria has accused the Loraan Volar of attempted assassination and the outcast Aeons are sitting in judgment. 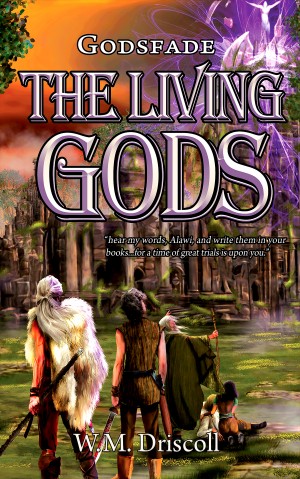 The Living Gods (Godsfade #1) by W.M. Driscoll
Price: $5.95 USD. Words: 116,540. Language: English. Published: November 17, 2016. Categories: Fiction » Fantasy » Epic, Fiction » Science fiction » General
Fleeing false charges of treason, Makiria and Volar lead a ragtag band of outcasts north to the Wood Coast of the Èrin Forest in search of a safe passage. There, they stumble upon Tome and Ketri. When their homes are destroyed and their families cruelly murdered, the two teens are rescued by the Aeons, to Ketri and Tome, living gods as distant and unfathomable as the stars in the sky.

You have subscribed to alerts for W.M. Driscoll.

You have been added to W.M. Driscoll's favorite list.

You can also sign-up to receive email notifications whenever W.M. Driscoll releases a new book.