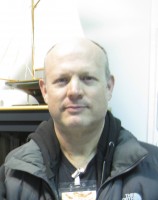 Michael Selden has lived all around the world and has been an eyewitness to numerous historical events such as the building of the Berlin Wall. His father was a non-commissioned officer in the United States Air Force. Mike was graduated from St. Mary’s High School, Colorado Springs Colorado and later earned a degree in physics from the University of Florida.

He has worked as a research physicist, program manager, and principal investigator on numerous scientific and engineering efforts during his career. He first developed technologies and techniques that helped expand our understanding of the earth and the earth-moon system and to validate the relativity principle of equivalence.

Besides his work in physics and the publications in technical journals, he has always had a keen interest in literature, particularly fiction, and he began writing short stories when he was twelve years old.

Having achieved the goals he set for himself in science and technology, Michael retired from his first career to pursue his other passion, writing, turning what had been a life-long avocation into a full-time pursuit.
In July 2013, Michael moved from Baltimore, Maryland to Woodland Park, Colorado, returning to the region where he went to high school, to write and publish books.

When he is not writing, reading or staying abreast of the latest developments in the world of physics, he likes to travel and hike, cook, ride motorcycles, and meet up with friends. He is learning how to fly-fish and hunt.

How do you approach cover design?
The cover is designed to show some aspect of the book. For The Boy Who Ran, I used the light allegorical content from the book to design the cover. As one reader said in a review, the cover tells a part of the story.
What do you read for pleasure?
Everything. I read and write across a span of genres. The main criteria is that the book be good. I want characters that are more than superficial, plots with interesting twists, and something else, an undefinable quality in the book that tells me that the author took the time to construct a world that is complete and as interesting as the story. I want to be carried away to new places and to forget where I am.
Read more of this interview.

Where to find Michael Selden online

You have subscribed to alerts for Michael Selden.

You have been added to Michael Selden's favorite list.

You can also sign-up to receive email notifications whenever Michael Selden releases a new book.