Craig Stewart is one of America’s most talented young playwrights. His debut stage production, A Day in the Life, finished a successful run in Atlanta and established Stewart as one of the nation’s up and coming
artists.

The first in his immediate family to graduate from college, Stewart attended Hampton University, where he received a degree in liberal arts. Originally a native of Baltimore, Stewart moved to Atlanta over a decade ago with dreams of making it in the music industry. Despite his passion and several opportunities to work with established artists and producers, Stewart eventually realized that his future was not just in music. He turned his attention to writing and, in 2002, his first play, A Day in the Life, opened at Atlanta’s 14th Street Playhouse.

The show’s original running was cut short by a lack of funding and Stewart’s personal battles with depression. In 2004, Stewart founded his own greeting card company, Say It in a Card, LLC. It was through Say It in a Card that he eventually met someone eager to sponsor a second run of A Day in the Life. The new production opened in 2007 to a sale out crowd at the Balzer Theater and was quickly hailed as a powerful artistic statement regarding the emotional and societal pressures experienced by gay African American men. Born out of Stewart’s own personal struggles to find love and a sense of self- understanding as a gay man, A Day in the Life touched the hearts and minds of audience members and rapidly won Stewart praise from critics and publications like Southern Voice and DAVID magazine. Riding the momentum of the plays success in Atlanta, Stewart is currently poised to take the show on a national tour in hopes of spreading awareness about the plight of gay African American men and those infected with HIV. He also hopes to empower others while he dispels myths about the homosexual community and educates audiences to help prevent the spread of HIV and AIDS.

In addition to his success as a playwright, Stewart has written for the Atlanta-based theater company, Youth Ensemble of Atlanta (YEA)—an organization supported and funded by Jane Fonda. His greeting card business (Say It in a Card) has been very successful and his talents have won him the prestigious honor of writing personalized cards for such high-profile clients as Darius Miles of the Portland Trailblazers and award- winning recording artist Brandy. Stewart has also co-produced a number of reality show
projects in partnership with Kenny Leon Productions and with noted television personality and world-renowned fashion expert Dwight Eubanks.

But Craig Stewart’s passion and efforts reach beyond his artistic career. He is also an active volunteer, serving his community through numerous projects. Stewart has facilitated workshops designed to educate African American homosexual men regarding sex and the facts about HIV. In addition, he has consistently worked with Project Open Hand, an organization devoted to preparing and delivering meals to terminally ill individuals.

Not content to bask in the glory of his past successes, Stewart is eager to continue impacting others through his writing and creative endeavors. Once A Day in the Life is on tour, Stewart looks forward to beginning production of his second play, Someone Else’s Child. Through his dramatic productions, entrepreneurial endeavors, and volunteer efforts, Stewart aims to continue making a difference in the lives of others as he seeks to help and enlighten those he reaches.

Where to find Craig Stewart online 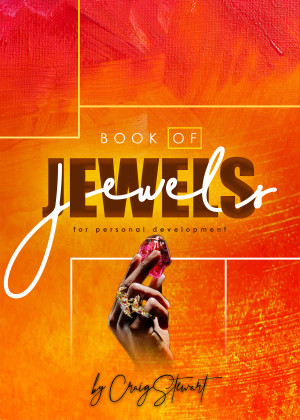 Book of Jewels, For Personal Development by Craig Stewart
Price: $13.99 USD. Words: 40,780. Language: English. Published: February 17, 2020. Categories: Nonfiction » Self-improvement » Personal Growth / General, Nonfiction » Self-improvement » Emotional healing
Book of Jewels, for personal development contains eleven of the biggest life lessons that I’ve learned, and those lessons are captured within each chapter. The chapters open with an original quote that frames it to help bring each life lesson into focus. Visit, CraigTheWriterStewart.com 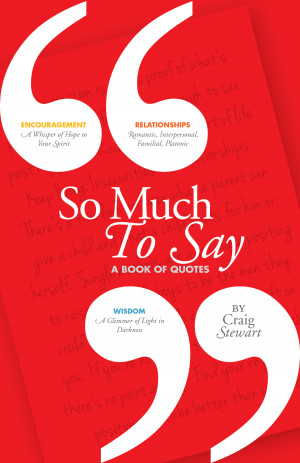 So Much To Say, a Book of Quotes by Craig Stewart
Price: $12.99 USD. Words: 4,140. Language: English. Published: November 17, 2017. Categories: Nonfiction » Relationships & Family » Abuse / domestic partner abuse
A collection of original quotes, all penned by Craig Stewart, that speak to a variety of relationships that relate to family, friends, romantic love and interpersonal. Stewart was lauded for his openness in a two part memoir series Words Never Spoken, a memoir and One Thing for Certain, Two Things for Sure, a memoir continued. 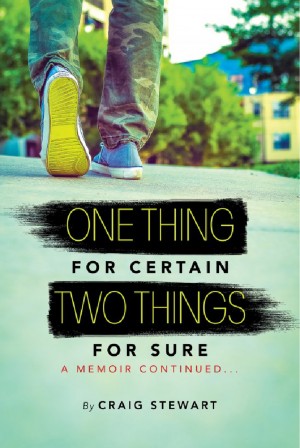 One Thing for Certain, Two Things for Sure A Memoir continued by Craig Stewart
Price: $13.99 USD. Words: 56,520. Language: English. Published: May 11, 2015. Categories: Nonfiction » Gay & Lesbian » Biographies
One Thing for Certain, Two Things for Sure reminds us that there are no mistakes or accidents in life—that everything happens as it should. Stewart allows us, the reader, an intimate look into his personal life through stories that center on dating, love, fear, fate and destiny. “I hope my story, these words, will help navigate the lives of men and women everywhere.” 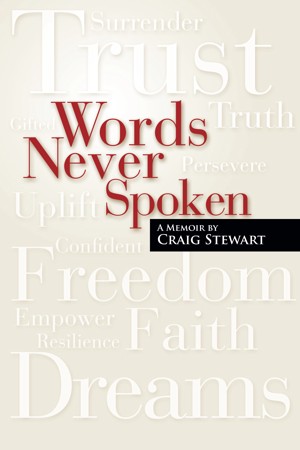 Words Never Spoken by Craig Stewart
Price: $12.99 USD. Words: 85,850. Language: English. Published: May 29, 2012. Categories: Nonfiction » Biography » Autobiographies & Memoirs
Craig Stewart is one of America’s most talented young writers. He has worked with established recording artists, and his debut stage production, A Day in the Life, finished a successful run in Atlanta establishing Stewart as one of the nation’s up and coming artists. Now he returns with his memoir, “Words Never Spoken”.

You have subscribed to alerts for Craig Stewart.

You have been added to Craig Stewart's favorite list.

You can also sign-up to receive email notifications whenever Craig Stewart releases a new book.