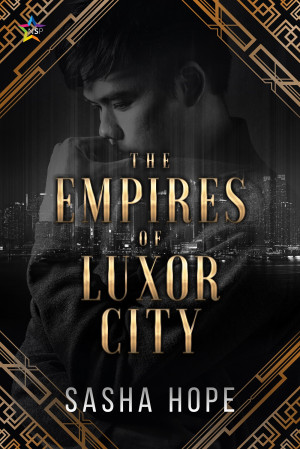 The Empires of Luxor City

Dom and Lin are both suspicious of each other at first for their own reasons, but as that wariness wears away a deep attraction develops between them. Dom dotes on Lin, leaving the once stone-broke Omega bathed in finery he never could have imagined. They start planning for Lin’s upcoming heat, when they will be driven together by their kindling bond and strong compatibility as an Alpha and Omega pair. However, in the midst of their swelling romance, Luxor’s most notorious Alpha reappears sparking a gang war that threatens to turn the entire city into a battleground.
Available ebook formats: epub mobi pdf lrf pdb txt html
First 20% Sample: mobi (Kindle) lrf pdb Online Reader
Price: $5.99 USD
Buy Add to Library Give as a Gift
How gifting works
Create Widget
Tags: urban fantasy thriller crime family drama gay lgbt crossdressing futuristic alpha omega hurt comfort
About Sasha Hope

Sasha Hope is a lover of story, art and design based in Canada. As a writer and an artist, she enjoys having the opportunity to create new characters and build new worlds for readers to explore. Having studied linguistics and a myriad of languages from a young age, she is passionate about including characters of different backgrounds in her work. Whether the setting is fantasy or reality, she believes that a diverse cast with diverse languages and cultures is a wonderful thing.

Crafting stories that embrace MM romance and erotica is her modus operandi. When she is not creating new worlds she is travelling this one looking for inspiration or enjoying her career in the videogame industry.

Reviews of The Empires of Luxor City by Sasha Hope

You have subscribed to alerts for Sasha Hope.

You have been added to Sasha Hope's favorite list.

You can also sign-up to receive email notifications whenever Sasha Hope releases a new book.