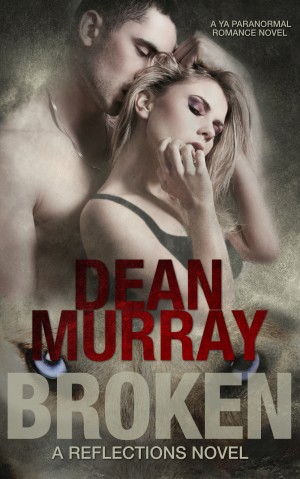 Broken: A YA Paranormal Romance Novel (Volume 1 of the Reflections Books)

By Dean Murray
Rated 4.00/5 based on 13 reviews
Sometimes love finds you when you aren't looking for it.

The accident that forced Adri and her mother to move to a new high school also cost Adri her dad and sister. Adri just wants to blend in and buy herself time to grieve, but two of the most popular, gorgeous guys in school are about to take an inexplicable interest in her.

Broken is a YA Paranormal Romance Novel. More
Sometimes love finds you when you aren't looking for it.

The accident that forced Adri and her mother to move to a new high school also cost Adri her dad and sister. Adri just wants to blend in and buy herself time to grieve, but two of the most popular, gorgeous guys in school are about to take an inexplicable interest in her.

Adri will be forced into a world where the players aren't all human. She will be forced to choose between Brandon and Alec, and this time the wrong choice could get her killed.

Publisher's Note: Broken is a YA Paranormal Romance book, and is one possible entry point into the books that make up the Reflections Universe. The Reflections Universe is a series of clean books featuring vampires, shape shifters, werewolves and more, which has been written so that it can be safely enjoyed by both teens and adults. Broken is followed by Torn, and is one of several YA books available from Dean.

The Reflections Universe: Some stories are too full of teen shifter romance and heart pounding action to fit into just one series!

Dean started reading seriously in the second grade due to a competition and has spent most of the subsequent three decades lost in other people's worlds. After reading several local libraries more or less dry of sci-fi and fantasy, he started spending more time wandering around worlds of his own creation to avoid the boredom of the 'real' world.

Things worsened, or improved depending on your point of view, when he first started experimenting with writing while finishing up his accounting degree. These days Dean has a wonderful wife and daughter to keep him rather more grounded, but the idea of bringing others along with him as he meets interesting new people in universes nobody else has ever seen tends to drag him back to his computer on a fairly regular basis.

Reviews of Broken: A YA Paranormal Romance Novel (Volume 1 of the Reflections Books) by Dean Murray

The story starts out slow and drags on and the climatics khave gaps in each of action parts.i was disappointed with it.

For more discerning fans of paranormal romance, there might a good book in here somewhere but it's buried under many problems.

The heroine Adriana's characterization is wildly inconsistent. For starters, she seems to spend 1/4 of her time having fainting spells and panic attacks due to recent trauma in her family, another 1/4 doing schoolwork, 1/4 obsessing over hot boys, and another 1/4 being incredibly snarky and judgmental towards everybody else. And no, "inconsistent" is not the same thing as "complex", though a lot of authors seem to have trouble telling the difference.

I sympathized with Adriana, but also found her annoying and sometimes flat-out unlikeable. It's hard to understand, with heroines such as this, what the Hottest Boy In School characters see in her. These heroines are designed purely to appeal to female readers' inner Mary Sues. Now, there's nothing inherently wrong with Mary Sues if that's your thing -- it's just, well, the book should have other good qualities, too. And this one is uneven, awkward, and boring.

I was bored enough that I gave up before anything overtly supernatural happened, but I could more or less see where it was going because of my knowledge of genre tropes (not because the first chunk of the book planted seeds; no intriguing seeds were planted for me). Warring were-animal groups of some sort, clearly, with leaders who both like The One Special Human Girl.

I'm giving this 2 stars. From what I did read, I found it okay in the way that I found *Twilight* vaguely okay: problematic, but not without a certain guilty appeal. At least Adriana is more interesting than Bella Swan.

Fantastic read. The story had me so hooked I couldn't put it down.

I read this one first and Torn second. I wouldn't have had it any other way. It worked for me to see the woman's point of view first. These books are some of the best that I have read and I've been on a reading tear.

Awesome book. Once I started reading it, i found it hard to put the book down. The connection between Alec and Adrianna is so originally romantic you just find yourself into it and can't get your eyes off of the book.

Really liked Torn,Broken pissed me off because it is the identical story writen from the heroine's perspective,felt like I was reading the same book twice.

I was impressed. Usually I don't like stories about shapeshifters, werewolves and the like, but the story is so well written, that you just want to know what happens at the next chapter.

Great Read:) I found this book first and didnt realize it was a series 3 chapters in and I put it down to look up Dean Murray, I have never heard of him before. ABoy was I surprized when it was a series and I was technically suppose to read Alec's side first. So I read them together. I bought Torn and read until I caugh tup with Broken and the flipped flopped them..Needless to say I cant wait to read the rest of the series and the other books Dean Murray has out. He is an amazing author, so glad I found him:)

You have subscribed to Smashwords Alerts new release notifications for Dean Murray.

You have been added to Dean Murray's favorite list.

You can also sign-up to receive email notifications whenever Dean Murray releases a new book.