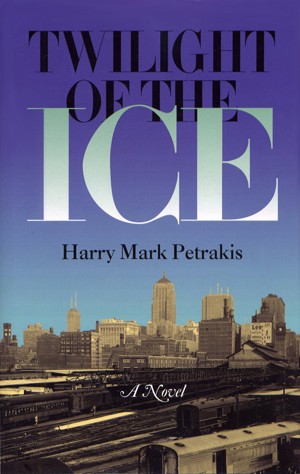 Twilight of the Ice

After fleeing from the despotic Turkish occupation of his homeland of Crete, and then escaping from boyhood servitude in his uncle's shabby Chicago lunchroom, Mike at last finds his calling in the craft of the ice at the Team Track, the desolate ice depot in the heart of industrial Chicago. Here, under the oppressive rule of brutal foreman Earl, and bolstered by the camaraderie of alcoholic former schoolteacher Rafer Martin, Mike carves out his fate.

Mike's icing world is populated by a rough crew of old-timers and rookies, including the stoic Polish icemen Thadeus and Sigmund, the buoyant and reckless Noodles, the brooding war veteran Stamps, and Mike's young helper and surrogate son, Mendoza. This harsh world is also home to Mike's beloved, the prostitute Reba; Rafer's temptation incarnate, the fragile Leota; and the old iceman-turned-preacher, Israel, a man plagued with apocalyptic visions of a second ice age in which mankind's salvation would depend upon the chosen icemen.

Beset by age and a failing body, Mike yearns to find his heir, someone to whom he can pass his skill and his devotion to the craft. After finding only cold indifference among the young summer workers, he finally is introduced to the powerful young giant, S.K., a born iceman. But when S.K. carelessly causes the death of an icing veteran, old hatreds surface and Mike's dream of a successor seems doomed. All that remains for the master iceman is a final savage struggle against his exacting taskmaster, Earl, and an even more relentless foe, the twilight of his own life.
Available ebook formats: epub mobi pdf rtf lrf pdb txt html
First 20% Sample: epub mobi (Kindle) lrf more Online Reader
pdb
Price: $9.99 USD
Buy Add to Library Give as a Gift
How gifting works
Create Widget
Tags: petrakis harry mark petrakis greek american novelist chicago novelist
About Harry Mark Petrakis

Harry Mark Petrakis is the author of twenty-three books, short-stories, and essays, and has been nominated twice for the National Book Award. His books include the 'A Dream of Kings' (1966), set in Chicago, which was a New York Times bestseller. It was published in twelve foreign editions and was made into a motion picture (1969) starring Anthony Quinn. He has won the O. Henry Award, and received awards from Friends of American Writers, Friends of Literature, and the Society of Midland Authors. He was the Nikos Kazantzakis Chair in Modern Greek Studies at San Francisco State University and the McGuffy Visiting Lecturer at Ohio University. In 2004, the American College of Greece in Athens presented him with an Honorary Doctor of Humane Letters Degree.

Reviews of Twilight of the Ice by Harry Mark Petrakis

You have subscribed to alerts for Harry Mark Petrakis.

You have been added to Harry Mark Petrakis's favorite list.

You can also sign-up to receive email notifications whenever Harry Mark Petrakis releases a new book.