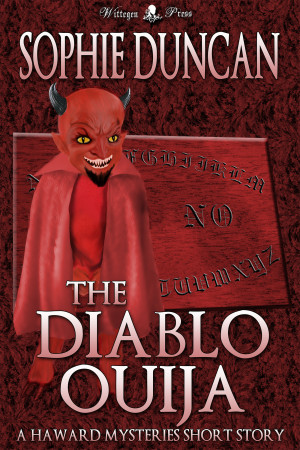 The Haward Mysteries is a set of Contemporary Fantasy, short stories and bargain priced novels full of magic and mystery with a side of CSI thrown in. Follow the Agatha Christie style whodunits of the novels, delve into the artfully rendered sorcerous science of the magical crimes and explore the enchanted world of the Haward Twins as they face supernatural trials in both their professional and private lives. Or enjoy a briefer, less investigative sortie into the twins lives in the short stories.

Also in Series: The Haward Mysteries

Found for free at Smashwords.


Short, quick, to the point--and with an ominious end! A nice little part of the Haward mysteries.

(review of free book)
humanitysdarkerside reviewed on May 2, 2013

The Diablo Ouija is a Haward Mysteries short story. The Haward Mysteries are about the police officers Remy and Theo Haward at the Sorcerous Crimes Taskforce's, Murder Squad. With a name like that for a task-force you can probably imagine that their investigations most probably involve something inexplicable. The title of the short story also makes it obvious we are dealing with the super-natural/para-normal.

I'm not saying the twins are insane, but a little unorthodoxy is the least of their qualities. They are on the look-out for an incredibly dangerous magical item: (drumroll) The Diablo Ouija. Three teenagers are already dead and Remy and Theo suspect they have not seen the last victims yet. When they turn to Theo's old boss, retired DCI Swanson, for information about the old case, they discover something they had not previously known, something that will lead them into dangers untold.

Like most brothers, Theo and Remy are very different. In spite of their differences, they are willing to go to any length to make certain the other brother is safe. The Diablo Ouija tests their loyalty to each other. We get plenty of creep-factor but no tipping over into horror. An enjoyable tale.

It would be great, if the twins actually doing some real investigation in the future