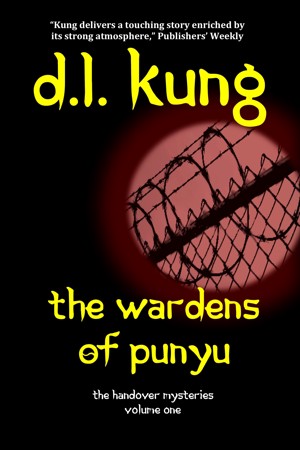 The Wardens of Punyu (The Handover Mysteries, Vol. I)

By D. L. Kung
Rated 4.00/5 based on 4 reviews
Claire Raymond's rookie Business World colleague disappears without trace across the Hong Kong-China border into one of the mainland's new "special economic zones." Claire's search to rescue him leads her through the free-for-all landscape of Guangdong's coastal export boom into the murky use of Communist prison labor camps to feed its illegal organ transplant trade. More
THIS IS THE REVISED AND RE-EDITED VERSION, WITH UPDATED ACKNOWLEDGEMENTS, THANKS, EYES & EARS EDITIONS

"This is a Hong Kong readers don’t come across very often and the author brings the city alive." Chicago Tribune

With only a year to go before Beijing takes over the British colony, China's transition to power is revealing its dark and lawless side. Claire's desperate search to rescue Vic across Hong Kong’s border with China leads through the free-for-all landscape of Guangdong's coastal export boom into the murky use of Communist prison labor to feed the organ transplant trade. And Claire's hard-won career in a man’s world may be meeting stiff competition for her attention now that she’s met the dashing Swiss, Xavier Vonalp, setting up a Hong Kong base for his UN employers.

Novelist D. L. Kung worked as a journalist for over twenty years in Asia for publications including Business Week, the Economist, the Washington Post, National Public Radio and the International Herald Tribune. Kung won the Overseas Press Club award for Best Humanitarian Coverage in 1991 and was nominated for the Orange Prize for Fiction in 2004.

D. L. Kung worked for over twenty years in China as a reporter, covering everything from narcotic control in Hong Kong to political infighting in Beijing's inner Communist Party circles. Over the course of a career leading from Hong Kong to Beijing to Tibet to Sichuan and the Greater China coastline, Kung kept notes that now inform The Handover Mysteries with a vivid sense of place and pace.

About the Series: The Handover Mysteries

A suspenseful and vivid trilogy capturing the mood of China's periphery during the years of the handover of Hong Kong to the mainland. Three full-length mystery novels take journalist Claire Raymond from the HK of departing British colonials to the coastal factories of early foreign joint ventures in Guangdong Province to a Tibet coping with the construction of a highspeed rail exploiting local labor under slave conditions. The Handover Mysteries feature an authentic feeling for the sights, smells and conflicts of Asia two decades ago—with resonance for issues that continue to this day.

Starred review from Publishers' Weekly for D.L. Kung, an award-winning former correspondent for The Economist, Washington Post and BusinessWeek.

Also in Series: The Handover Mysteries

This was a great story about the time just before Hong Kong returns to China. It moved well and the characters were believable. The editing leaves a bit to be desired, but if one can get past that it's a good read. I would read more by this author.

In 1996, Claire Raymond is a smart, shrewd former journalist running the Hong Kong branch of a business magazine. Claire was born in the States but has lived in Hong Kong since the '70's. With her job, her hair color (in Chinese mythology red hair spelled demon), and her height, at 5'10" she was taller than many Asian men, she had a difficult time with long term relationships.

Claire's friend, Father Fresnay, has sent a man to talk to Claire. This man, a doctor, tells a very strange and if true, an incredibly gruesome story involving the trafficking of viable human organs for transplant. What she hears is very unsettling but there is just this man's word and no collaborating evidence and she has a lot on her plate. Her New York deadline is looming and her reporter hasn't shown up, nor did he make an interview he had scheduled. Before she can look into the strange story the doctor has told her, she must find her reporter Vic. She has Cecilia, her Chinese assistant, send out feelers about the story, to see if any of her journalist friends have heard about this organ trafficking story. She needs to track down her wayward reporter Vic.

Instead of Vic, Claire finds Chris Hager, her magazine's Bangkok stringer. A stringer is a reporter that works freelance, usually for several different papers and magazines. Claire's not sure what he's doing in Hong Kong, in Vic's room, but he gives her the old song and dance. She eventually gets a message, supposedly from Vic, saying he's fine, had taken a little holiday, but now due to extreme traffic, and tourists, he will be delayed getting back. As he often comes up with excuses, Claire is not surprised.

A few days later, Claire goes for a hike with 2 of her friends. A body washes up on a nearby shore, badly damaged by marauding sharks, and a single bullet hole. Worse yet, Claire catches a glimpse of the man, its one of her reporters!

After an autopsy, and a meet with other interested parties at the embassy, Claire is informed that one of her reports was spotted in China, which is horrible news! The embassy can't help him because they have such a fragile relationship with China. Claire is given a surprising suggestion.

With the death of one of her male reporters, and having to sneak into China (if the Chinese find out she's entered without the proper journalist papers, it could result in a major incident) to get the other reporter out, Claire's time is running out. But as Claire soon finds out, things are just getting interesting.

This has a great locale, very well described, right down to the bricks on the streets, credible and likeable characters (I can picture Cecilia in my mind easily), and an interesting mystery. I had really high hopes for this book because of the different locale and a rather gruesome mystery but it just didn't grab me tight. I would still give it a read as the author has a beautiful way of describing the locales, the scenes and the people.

I struggle with reviewing this book. My struggle is whether to rate based on the storyline or the quality of writing. More on that later.

The storyline is morose and compelling. I have no doubt that the subject matter is accurate and indicative of what goes on behind the red curtain. From that perspective, this is a compelling story that we should all have the opportunity to read. Global reality is sometimes very hard to accept.

The writing is obviously done by someone for which English is a second language. The author's English language skills are pretty good but that makes it all the more difficult to read a sentence when the syntax goes awry or extra words are inserted. I found myself re-reading sentences over and over trying to find the point. Sometimes I failed and had to read on. In addition, the author repeats storyline items over and over as if he is trying to remind the reader of the instant point he wishes to make. I found this redundance bothersome.

I compromised my rating as a 4 for the storyline and a 3 for the writing style for an average of 3.5. Since I think the story is important for everyone to be aware of, I rounded the rating up to a 4 (except on Librarything where I can give half star ratings.)

I enjoyed everything about "The Wardens of Punyu." The story is well plotted and told in a distinct, very descriptive writing style. I could "see" the buildings and streets and Claire moving in them. I am glad that the aspect of obtaining and selling body parts was not made a spectacle by a long narrative about it. Instead, I was pleasantly surprised by a well crafted mystery with a strong and likable main character. The technical and geographical knowledge of the author blend well with the dialogue and action. I recommend "Wardens" to readers who are tired of silly mysteries. I look forward to reading the others in this series.

You have subscribed to alerts for D. L. Kung.

You have been added to D. L. Kung's favorite list.

You can also sign-up to receive email notifications whenever D. L. Kung releases a new book.