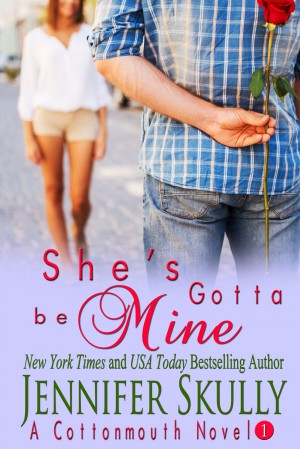 She's Gotta Be Mine (a sexy funny mystery/romance, Cottonmouth Book 1)

Rated 4.67/5 based on 3 reviews
Dumped by her husband for his former sweetheart, Roberta Jones Spivey reinvents herself. The new Bobbie Jones—new haircut, new attitude—follows him to Cottonmouth, California. The best way to show him his mistake: take up with the town bad boy, sexy Nick Angel—who’s reputed to be a serial killer. It’s going according to plan...until murder rocks Cottonmouth. Nick didn’t do it...did he? More
Product Description

If you’re a fan of Bella Andre, Susan Andersen, Rachel Gibson, Jennifer Crusie, and Janet Evanovich, then step into the world of Jennifer Skully!

If you missed it the first time around, KOD Daphne winner “Sex and the Serial Killer” is back with a new title, “She’s Gotta Be Mine”, and a slight text revamp. But it’s still laugh-out-loud funny, peopled with hilarious characters in the small town of Cottonmouth, California. Not to mention an alleged serial killer who’s too devilishly handsome to ignore.

Dumped? For her husband’s high school sweetheart he hasn’t seen in twenty years? Roberta Jones Spivey isn’t going to lay down for that. Instead, she reinvents herself and the new Bobbie Jones—new haircut, new name, new attitude—follows her soon-to-be ex to the small Northern California town of Cottonmouth.

What better way to show him—and his sweetheart—what he’s missing in the brand new Bobbie Jones than taking up with the town’s local bad boy—who’s also reputed to be a serial killer. Nick Angel is devilishly handsome and sexy as all get-out. In a word, perfect.

It’s all going exactly according to plan...until a real murder rocks the little town of Cottonmouth. Of course, Nick didn’t do it...did he?

“She’s Gotta Be Mine”, previously published as “Sex and the Serial Killer”, is a contemporary romance of approximately 100,000 words / 400 pages. The book contains the following bonus material:

Excerpts from “Dead To The Max”, Max Starr Series, Book 1, and “Twisted by Love”, Reincarnation Tales, Book 1 by Jasmine Haynes and “Baby, I’ll Find You” by Jennifer Skully

Huntress Reviews “A witty novel that will keep you engrossed until the very end!” Detra Fitch

Jasmine Haynes, Rita Finalist for Somebody’s Lover, plus two-time Holt Medallion and National Readers Choice Award winner, is the author of over 35 classy, erotic romance tales. Look for the final book in her popular DeKnight series, The Principal's Office. In 2013, she'll be starting a sexy new series for Berkley Heat, beginning with The Naughty Corner coming Oct 2013 and Teach Me a Lesson in Apr 2014. And there will be more in the sensual West Coast series! Look for Book 4, The Other Man, available now. Of course, she’s also the author of the award-winning Max Starr psychic mystery series. And don’t miss her writing as Jennifer Skully, KOD Daphne award-winning author of contemporary romance, bringing you poignant tales peopled with hilarious characters that will make you laugh and make you cry. Visit her website at jasminehaynes.com and her blog at jasminehaynes.blogspot.com

Award-winning author Jennifer Skully is back! The author of KOD Daphne winner SHE'S GOTTA BE MINE (formerly Sex and the Serial Killer) brings you poignant tales of loss and renewal. Her books are peopled with hilarious characters that will make you laugh and make you cry. And be sure to read her classy, erotic romances written as Jasmine Haynes, Rita Finalist for SOMEBODY’S LOVER, plus two-time Holt Medallion and National Readers Choice Award winner. In 2013, she starts a sexy new series for Berkley Heat, beginning with THE NAUGHTY CORNER coming Oct 2013 and TEACH ME A LESSON in April 2014. And there will be more in the sensual West Coast series! Of course, she’s also the author of the award-winning Max Starr psychic mystery series. Visit her websites at jasminehaynes.com, jenniferskully.com, jbskully.com, and her blog at jasminehaynes.blogspot.com

A fun book with romance, mystery and comedy. The heroine's way of thinking and reactions to small town life was a hoot.

(reviewed 12 months after purchase)
candyconesa reviewed on on Aug. 3, 2012

It was a bit slow in the beginning but once into the story I couldn't put it down. I loved Bobbie's character and how she reinvented herself into a daring woman who could stand on her own two feet.

(reviewed 3 days after purchase)
Nicole Thornton reviewed on on May 28, 2012

Really enjoyed this story. Well written, great characters who acted, conversed and made decisions that felt true to their personalities, and a storyline that was enjoyable to watched unfold. Also liked how the secondary characters seemed to be well developed and were interesting in their own right. And most importantly, the female lead didn't need to be saved by the man, had some gumption, could think for herself, and the thought processes in her thinking helped to explain clearly why she was attracted to whom. Made it far more believable and not just a descriptive plot device. Thank you Jennifer Skully for writing a fun, well written read and I'm very pleased I can add you to my favourite author's list.

You have subscribed to alerts for Jennifer Skully.

You have been added to Jennifer Skully's favorite list.

You can also sign-up to receive email notifications whenever Jennifer Skully releases a new book.