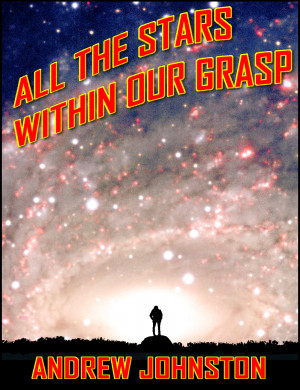 All the Stars Within Our Grasp

By Andrew Johnston
Rated 3.50/5 based on 2 reviews
Ten light-years of uncharted space is all that lies between home and the greatest score of all time - and the salvation of the entire universe. More
The Exterran Stretch, some 59.6 trillion miles into the heavens.

There was nothing normal about the job that the Taiyang Empire bureaucrat just offered to Jennifer Shen, but the payoff was just too damn good. It all seemed straightforward, too - track down a thief who absconded with a research project and make more money than any manhunter could ever hope to see in one lifetime. The one catch is the thief's destination - a place known to criminals of all stripes as "the Cradle," the homeworld of humanity whose location was lost when the planet was abandoned over a thousand years ago.

Jennifer isn't one to turn down a job just because it's impossible. She has an illegally modified ship ready to fly, a crazy Boy Scout type to pilot it, and a foul-mouthed refugee from an alien cult to navigate. Ten light-years of uncharted space is all that sits between Jennifer and retirement.

But there's more to the job than the bureaucrat mentioned. For one, there's the tiny detail that the research project in question has the potential to destroy most of the galaxy if the thief activates it in the wrong way. And then there's the Cradle itself, a planet abandoned when humans destroyed it...or so they thought. Humanity was brought low for a purpose, the beings who blew it all up are still watching, and they just noticed Jennifer and her crew.
Download: epub mobi (Kindle) pdf more Online Reader
lrf pdb txt
Price: Free! USD
Add to Library
Create Widget
Tags: space travel ftl travel
About Andrew Johnston

Born in rural western Kansas, ANDREW JOHNSTON discovered his Sinophilia while attending the University of Kansas. Subsequently, he has spent most of his adult life shuttling back and forth across the Pacific Ocean. He is currently based out of Hefei, Anhui province. He has published short fiction in Nature: Futures, the Arcanist and Mythic and will be featured in the upcoming Bad Dream Entertainment Horror/Humor Anthology.

Learn more about the author at www.findthefabulist.com.

Reviews of All the Stars Within Our Grasp by Andrew Johnston

This is a space opera quest for the stolen doomsday weapon story. That's probably all I need to say about the plot, it's one that been used before and will be used again. It's done pretty well, the characters have some personality and the story is entertaining enough to be worth the time. The universe is full of human 'Empires' and a few aliens. The aliens are all humanoid to some extent. One of the hostile species is pretty much Klingons from the Star Trek universe with a different name and a diet of live bugs instead of live worms. The humans all left Earth when its atmosphere burned up and no longer know where it is. Of course the stolen weapon has been taken there and the last section of the book happens there.

There are some battles and a big, gory one on Earth at the climax. It could have been more gruesome, but because the story is rather comic-book, it doesn't have enough impact to really turn my stomach. I look upon that as a good thing. Many of the obstacles on their path are rather contrived, sort of like the stompers on Galaxy Quest, so they didn't have the impact they could have either. The proofreading is a little lax at the beginning, but seemed to get better as it went on, or I just got used to it. There is just about no sex in the story, though one of the main characters is female. There is no science in the story, no notion of how the economy and society works, no notion of where the food comes from, etc. It ends like the beginning of a new story but I don't know of a sequel out there. He has a collection of short stories, some based on this book, but this story is much better than any of them.

This book is the pure, old-timey, space opera taken straight from the bottle. Galactic empires, a plucky lady bounty-hunter, a neo-Confucian bureaucrat, a corn-pone spaceship pilot, lots of regular aliens and a race of god-like (but nasty) super aliens, the fabled lost Earth – what I mean is, this book is packed tight. It’s well-written, full of action and easy to read, and a fine dose of escape fiction if you need that, as a lot of us do in this glum year of 2020. The book actually comes to a real conclusion, although the author steps on his own ending to add a hook for a subsequent book. Recommended as a good, lightweight romp.

(review of free book)
James Jenkins reviewed on May 10, 2020
(no rating)
The intro keeps me from even looking at this work, 10 light years of space in a straight line to home is nearly empty.

You have subscribed to Smashwords Alerts new release notifications for Andrew Johnston.

You have been added to Andrew Johnston's favorite list.

You can also sign-up to receive email notifications whenever Andrew Johnston releases a new book.