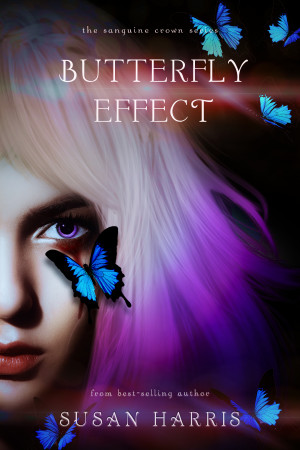 Drowning in a wave of grief and guilt, Ryan pushes herself to the limit to track down Maxim Smyrnoi and make him bleed. Used to going at it alone, she doesn’t want or need anyone getting in her way. She’s willing to do anything to capture her prey.

But Ryan finds herself caught up in not one, but two games of cat and mouse. For every step closer to Maxim she gets, Crown Prince Nickolai and the Royal Guard are hot on her heels.

Can Ryan set aside her lust for revenge in order to find justice? Or will her anger toward Nickolai and the rest of the Sanguine Court push her into a trap of her own making?

With Maxim taunting her at every turn, Ryan will have to be the epitome of an ice queen to not let the man get under her skin…

If you loved Midnight Sun by Stephenie Meyer, Vampire Academy by Richelle Meade, or Slayer by Kiersten White, then lower your fangs because vampires are back, and they're more enticing than ever.

Butterfly Effect is the second book in the Sanguine Crown series by Susan Harris. This new young adult vampire series pays homage to the classics, while breathing fresh and revitalized life back into the genre.

Future installments in The Sanguine Crown series by Susan Harris include:

Susan Harris is a writer from Cork in Ireland. An avid reader, she quickly grew to love books in the supernatural/fantasy genre. When she is not writing or reading, she loves music, oriental cultures, tattoos, anything Disney and psychology. If she wasn't a writer she would love to be a FBI profiler or a PA for Dave Grohl or Jared Leto.
Susan Harris is the author of Shattered Memories.

About the Series: The Sanguine Crown

“Finally, a new series for fans of Vampire Academy to sink their teeth into.” -Melanie’s Muses.

Also in Series: The Sanguine Crown

You have subscribed to alerts for Susan Harris.

You have been added to Susan Harris's favorite list.

You can also sign-up to receive email notifications whenever Susan Harris releases a new book.