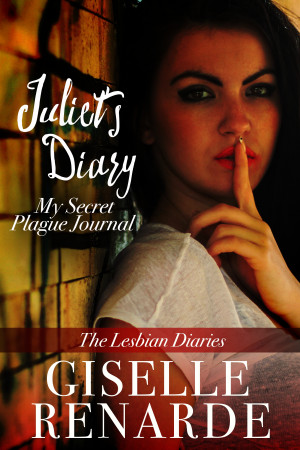 Rated 4.00/5 based on 1 review
Juliet is young and in love. Problem is, there’s a pandemic gripping the planet. She knows she’s not supposed to leave the house, but her lust for her girlfriend makes her defiant. How can Juliet get close to Romi if she has to stay away? Lesbian fiction from award-winning queer Canadian author Giselle Renarde.
Available ebook formats: epub mobi pdf lrf pdb html
First 20% Sample: epub mobi (Kindle) lrf more Online Reader
pdb
Price: $5.99 USD
Buy Add to Library Give as a Gift
How gifting works
Create Widget
Tags: lesbian love lesbian sex lesbian fiction starcrossed lovers sapphic sensual fiction pandemic book lesbian romeo and juliet love in the time of coronavirus plague diary shakespearean adaptation
About Giselle Renarde

Giselle Renarde is a queer Canadian, avid volunteer, and contributor to more than 100 short story anthologies, including Best Women's Erotica, Best Lesbian Erotica, Best Bondage Erotica, and Best Lesbian Romance. Ms Renarde has written dozens of juicy books, including Anonymous, Ondine, and Nanny State. Her book The Red Satin Collection won Best Transgender Romance in the 2012 Rainbow Awards. Giselle lives across from a park with two bilingual cats who sleep on her head.

About the Series: The Lesbian Diaries

Also in Series: The Lesbian Diaries

Juliet is a nineteen year old college student. She’s spoiled, selfish, lazy, horny, and bored by almost everything, except her girlfriend Romi – whom she met in high school when she was looking for someone to sell her the exam questions. Romi needed the money, but one thing led to another and now Juliet’s head over heels in love, or at least in lust, with her far more experienced lesbian main squeeze. All Juliet wants is to move into the group household Romi shares with her intentional family of queer and trans friends. To stave off this event, her wealthy parents have promised her a big chunk of money and a fancy new car, if she stays at home until she finishes her first year at university. Meanwhile the Covid-19 epidemic is raging, so she’s forbidden to even see the woman who dominates her thoughts. Not that Juliet’s all that likely to obey...

Juliet’s Diary is a vivid and painful journey into the mind of a young woman who is so unlikable she could almost be a parody of how the privileged have dealt with the pandemic – except that Giselle Renarde has made her shockingly believable. Juliet, like most young people, figures she’s in no danger from the virus. Romi, who’s barely surviving economically, knows better. Romi’s housemates have various disabilities that make them especially vulnerable, but they’re all working their tails off trying to stave off eviction.

Juliet is mostly oblivious to their problems. All she cares about is spending time with Romi, having sex with Romi, getting her girlfriend off and vice versa. Meanwhile, the world becomes increasingly alien, with social distancing, panic buying, and ultimately, friends and family dying. Juliet has a hard time adapting, though she half-heartedly tries. She even gets a job in a supermarket, in order to prove to Romi and herself that she’s not useless. She lasts exactly one day.

As you may have gathered, this is not a fun book. One would hardly expect fun from a story sub-titled “My Secret Plague Diary”. At the same time, it’s an impressive book, a historical document that will serve to remind people, in the future, just what the first pandemic of the twenty-first century was like. Juliet might be extreme, but not so extreme that she doesn’t remind me of some people I’ve read about (fortunately, not people I know personally).

I don’t think the author penned this book with the market in mind. It’s not a crowd pleaser. In fact, in some ways it’s a very difficult read, especially since we’re still in the midst of the Covid-19 crisis. At the same time, Juliet’s Diary has a sort of brilliant intensity that might take your mind off your own problems.

You have subscribed to alerts for Giselle Renarde.

You have been added to Giselle Renarde's favorite list.

You can also sign-up to receive email notifications whenever Giselle Renarde releases a new book.