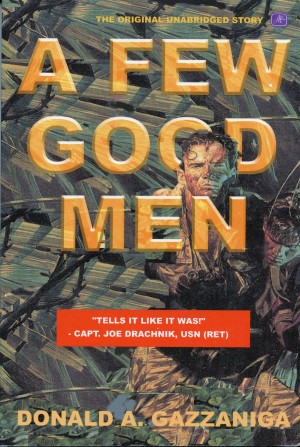 By Donald A. Gazzaniga
Rated 5.00/5 based on 1 reviews
A searing novel of the U.S. Marines in the hell of Vietnam. The author is a former Marine and a former writer, director and cinematographer for TV. He has also written a series of life-saving dietary books from Macmillan St. Martin's and the thriller novel, Air France One, released in 2011. More
A Few Good Men has received excellent reviews since its initial publication. A few are listed below.

"Fast paced, skillfully written: a spellbinder I couldn't put down. Anyone who has known troops will relive memories triggered by this classic tale of authentic fighting men. all will be moved by its poignant mesages."
- E. R. Thompson, Maj. General, USA (Ret.)

"For MY money, the author, the men he served with and commanded, and the composite figures about whom he writes with understated but clear affection his first novel-well, the word for any of them is 'hero." — J. N. Williamson, Author of The Longest Night

"If you ever wanted to learn about Marines, read this book. It's right on the money." — Scoop Adams, Colonel, USMC, Ret.

Donald Gazzaniga spent a full career in the motion picture and television industry as well as a bunch of years as an infantry officer in the United States Marine Corps. He has traveled the world with camera in hand, created and produced hundreds of TV commercials and worked on scores of sitcoms and other shows. He is also the only photographer to have ever been allowed on top of Mt. Rushmore since its opening. Don's career of writing led him into novels like A Few Good Men, Air France One, Batteries Not Included, War Hawks and cookbooks.

Don is also known as the "Low Sodium Guru." He was pegged with that moniker by Better Homes & Garden's publication for heart healthy Magazine. The reasons were simple. Don was the first known to have reversed CHF by cutting salt out of his life completely. No salt in anything. He has crafted five no salt, low sodium cookbooks. It was his effort at avoiding a heart transplant and proving that salt did indeed have something to do with promoting heart disease, Meniere's Syndrome, stomach cancer, Nephrotic Syndrome and other ailments including hypertension. Through is effort he as helped saved thousands of lives as well as helping hundreds to avoid a heart transplant. In Living Well Without Salt, Don walks the reader through the steps he took to regain his heart and to live on with a normal life. Now with 200 recipes and chock full of foods you can eat, his book has become a best seller among those who need to lower the sodium in their diets.

Learn more about Donald A. Gazzaniga

A compelling war tale told from a career Marine's perspective. What sets this apart from other war stories is the period in which it's set - the years between the Korean conflict and the US escalation in Vietnam. The author captures the spirit of that age; the characters and dialogue are authentic and believable. There's little self pity in the inner dialogue which is a refreshing change of pace from the many current war novels on the market. The characters, while not happy with the unholy politics that sent them into the bowels of the Mekong, react to their situations with courageous professionalism that is seldom seen in other novels. I enjoyed this historical tale very much.

You have subscribed to alerts for Donald A. Gazzaniga.

You have been added to Donald A. Gazzaniga's favorite list.

You can also sign-up to receive email notifications whenever Donald A. Gazzaniga releases a new book.