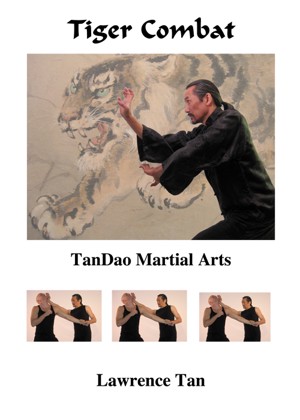 By Lawrence Tan
Get the edge for realistic self defense.

Diagrams and photos illustrate modern application of hidden biomechanics and tactics used by the masters. Unleash your inner tiger! More
Get the edge for realistic self defense.

Diagrams and photos illustrate modern application of hidden biomechanics and tactics used by the masters.

Lawrence Tan has spent a lifetime seeking, and finding, the traditional secrets to martial arts mastery -- and their practical, modern 21st century application.

The quest continues, with fifty years of experience that includes teaching, film fight choreography, actor, stunt man, writer and video director. He traveled to China and worked, studied, or met with many of the great masters, such as Cheng Man Ching, Wong Shun Leung, Chen Xiao Wang and Bruce Lee. Lawrence was also the Far East Editor for Inside Kung Fu Magazine.

By integrating Shaolin Animal Kung Fu, and Bruce Lee's JKD, Master Tan founded the TanDao system. In addition to streamlining traditional kung fu for modern fighting, TanDao teaches martial arts for wellness. TanDao's signature exercise, created by Master Tan, is the Universal Form, and both a book (Shambhala Publications) and a video (Wellspring Media/Weatherhill) on the moving meditation have been published.

A pioneer in the early days of martial art instructional videos, Lawrence Tan wrote, directed, and sometimes appeared in, titles such as Shaolin Tiger and Crane, and Wing Chun: The Science of In Fighting, with Wong Shun Leung, Bruce Lee's teacher. Today, along with his partner in work and life, Toni Tan, their production company continues to create videos, ebooks, workshops and seminars for martial arts and wellness.

The TanDao website presents videos and information as a signpost for the martial way. The question you will be asked: Are you an Evolving Martial Artist?

Review
Kenneth Murray reviewed on Feb. 9, 2013
(no rating)
Best Tiger Claw Material I have seen/found on the Web. There is a lot of " Junk " out there.

You have subscribed to alerts for Lawrence Tan.

You have been added to Lawrence Tan's favorite list.

You can also sign-up to receive email notifications whenever Lawrence Tan releases a new book.