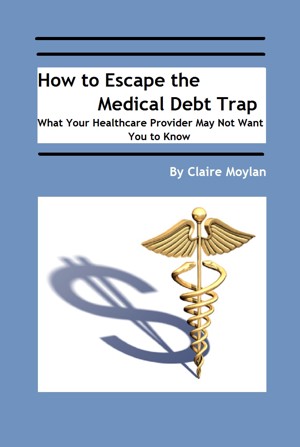 How to Escape the Medical Debt Trap

By Claire Moylan
A guide for those already in medical debt or those wishing to avoid high medical costs. Insured, uninsured, or under-insured can all benefit from some of the strategies revealed in this book on how to conquer medical debt nightmares. Learn valuable financial techniques on how to handle excessive medical debt so it doesn't haunt you for the rest of your life.
Available ebook formats: epub mobi pdf rtf lrf pdb txt html
First 20% Sample: epub mobi (Kindle) lrf more Online Reader
pdb
You set the price! USD
Buy Add to Library Give as a Gift
How gifting works
Create Widget
Tags: debt debt free debt settlement medical payments medical billing medical discovery
About Claire Moylan

You Are a Writer

“Why can’t you write like she does? It is not even her first language!”

My fifth grade Portuguese teacher was scolding the class after reading my paper out loud. The assignment had been to describe a spring day. After she finished reading it, the class audibly sighed as I got more and more uncomfortable. She knew I was a writer. The class knew I was a writer. It was only I that lacked that confidence. Besides, my parents told me I would starve if I chose writing as a profession. So, I chose engineering instead.

It wasn’t until the economy crashed that I discovered the true worth of my writing. It was the single thing that kept me afloat when no other jobs were to be found. I had found my calling, even though it had always been there. I had just chosen otherwise, for a time. It would have been far easier on me, if I had just embraced my calling earlier. I think that is true of most of us. We all have something special to share about ourselves, but we’re afraid we can’t express it properly. If you think there is something you want to express and can’t find the words, just email me at Moylan.claire260 at gmail dot com. I know how to take even the most disparate concepts and weave them into an inspiring and engaging story for others.

Claire Moylan has been a freelance writer since 2006. She holds a Master’s in Transpersonal Psychology and a Bachelor’s in Engineering. Claire has lived in many places, including: Brazil, Africa, Mexico, and nearly all 50 states in the United States. She hated traveling for quite a long time, but now wants to travel again. She owns a cat called Shakespeare who tells her to lighten up all the time and insists that nothing is so serious that a good game of kitty tag won’t solve. People think Claire is funny, but most of the time she is just being herself and can’t help it.

You have subscribed to alerts for Claire Moylan.

You have been added to Claire Moylan's favorite list.

You can also sign-up to receive email notifications whenever Claire Moylan releases a new book.