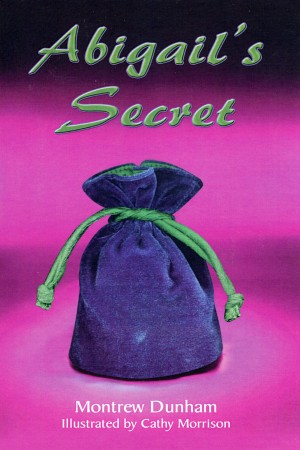 By Montrew Dunham
This is the story of a young girl struggling to keep a secret against all the pressure to reveal it. The setting is a family in the Great Depression and the adjustments they make to deal with suddenly having no money. Their large family home becomes over crowded as aunts, uncles and cousins move in. Family relationships are further strained by a mystery and its connection to Abigail’s secret. More
ABIGAIL’S SECRET is an historical novel for young readers set in the Great Depression. The story turns on the experiences of ten-year-old Abigail. Her whole world seemed to change when all their relatives moved into their house. Well, not quite all of their relatives, but almost. These were the people who used to come for dinner and then went home. Only now, nobody went home!

Uncle Mike was the first one to come to stay when he lost his job. And that was kind of fun because Uncle Mike helped out and he was always glad to join in a card game. Their house had always seemed to have plenty of room with their family, her father and mother, her 18 year old sister, Caroline, her brother Robbie who was 14 and of course with Gram, who was her father’s mother. But it all changed when Uncle George lost his job, and they didn’t have any money and he, Aunt Hester and Gloria moved in! Gloria was Abigail’s age and she was a pain! And worst of all Abigail had to share her room with Gloria!

The story opens with the inauguration of Franklin Delano Roosevelt and the closing of all the banks. With the bank holiday, the family is confronted with the problem of having virtually no cash money. The tale of how they stretch their resources shows a lot of imagination and creativity, though not everyone is always satisfied with the decisions. For example, when they had the telephone taken out, Caroline couldn’t understand how they could get along without a phone! Robbie had a paper route but when he went to make his collections, his customers had no money! Then there were those problems of all the people trying to get along together. The story twists and turns when Abigail promises to keep a secret and was pressured again and again to tell. And the events are further complicated by a confusing mystery involving the secret.

She first learned to love history as a Latin student at Butler University where she earned her A.B. degree. Her Master’s degree is from Northwestern University.

Dunham has been fascinated by where her research has led her as she gathered information on the life and times of the people who have made history. She lives in Downers Grove, Illinois where she is active in the Downers Grove Historical society and has written two books about the history of the Village, “Downers Grove 1832 to 1982” and “Downers Grove Revisited.”

When she isn’t writing she loves spending time with her family, her children and grandchildren in Illinois and Texas.

Also in Series: The Story of Abigail

You have subscribed to alerts for Montrew Dunham.

You have been added to Montrew Dunham's favorite list.

You can also sign-up to receive email notifications whenever Montrew Dunham releases a new book.