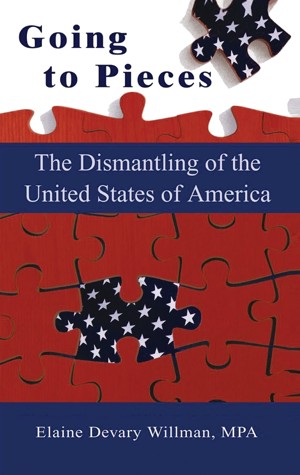 Going To Pieces…the Dismantling of the United States of America

By Elaine Devary Willman
Follow two brave women who discover, document and report a frightening and escalating reality: Congress is spawning tax-funded tribalism across America. Enrolled tribal members are dual citizens – full citizens since 1924, but “federal instrumentalities,” (property) of the federal government as dependent wards. Congress must end race-based separatism and unequal citizenship in America. More
About Going To Pieces…the Dismantling of the United States of America: Think “Thelma and Louise” – two women who took an unusual road trip. Only the road trip that is Going To Pieces… is about a system taking down this country economically, politically and geographically. The author and a videographer journeyed across 17 Indian reservations from Washington State to New York, capturing over 130 hours of direct testimony on video from farmers, tribal members, teachers, bankers, sheriffs – all manner of folk who live within the historic or actual boundaries of Indian reservations. The stories captured were so stark. The folks speaking had felt unheard for decades. The author promised each of them that their story would be told and offered anonymity to anyone in need. No one wanted anonymity. “Tell the truth; we have to be heard.”

While the road trip occurred in the fall of 2004, and the book was written in the spring of 2005, due to serious controversy and risk, the author has just this year assigned an ISBN number to Going to Pieces…and made it available to the open market.

The original purpose of the journey was to produce an 88-minute documentary, but the people interviewed and the stories told were so many, a documentary fell short. So, the author transcribed the actual words from the 130 hours of video, and re-lived the journey for the reader. The reader is asked to realize that this book only addresses 17 of the 565 federally recognized Indian tribes, and leaves it to the reader to imagine the full impact occurring across rural America, and now through tribal casinos, seeping quickly into urban America.

Mainstream media is continuously and substantially funded by tribal casino advertising dollars that the reality of life on Indian reservations is taboo to discuss out loud or on television, in print or on the radio. The end result is “hush-money” to never discuss real life on Indian reservations. Both political parties are equally funded with campaign donations from tribal governments, tribal associations and thousands of lobbyists, to the extent that Congress quickly serves some 565 tribal governments and turns a mournful deaf ear to the hundreds of thousands of their constituents who live on or near Indian reservations but are not tribal members.

Do you know... that one small Montana tribe of 5,130 people had in 2004, an annual Operational Management Budget of $373 million? This annual budget of a single tribe is larger than the national U.S. Fish and Wildlife's annual budget for the entire country.

Do you know... that in some areas of the country, you must obtain a tribal hunting permit as well as a state permit to hunt on your own private property?

These are just a few examples of how flawed federal policy is creating what some are calling the "balkanization" of the United States.

Elaine Willman, MPA, was Chair (2002-2007) of Citizens Equal Rights Alliance (CERA) a national organization of community education groups and citizens in 28 states who reside within or near federally recognized Indian reservations. CERA is the only national organization dedicated to assisting tribal members in receiving civil rights within their tribal governments, and protecting the rights of non-tribal citizens from tribal government over-reaching.

Ms. Willman has a Master’s in Public Administration (MPA) from California State University at Northridge, and is two-thirds through a doctoral program focused on federal Indian policy. Ms. Willman served as Community Development Director for the City of Toppenish, WA and later was elected to the Toppenish City Council (2006-2008), WA. She was former City of Ojai (CA) assistant to administrator in the 1980s, and served as adjunct-faculty for 12 years in the 1990s through 2007 in Masters in Public and Business Administration programs for a university in WA. Ms. Willman is currently Director of Community Development & Tribal Affairs for the Village of Hobart, WI, a beautiful suburb of Green Bay that is co-located on the historical Oneida Indian Reservation. She is of direct Cherokee lineage through both her mother’s family.

You have subscribed to alerts for Elaine Devary Willman.

You have been added to Elaine Devary Willman's favorite list.

You can also sign-up to receive email notifications whenever Elaine Devary Willman releases a new book.