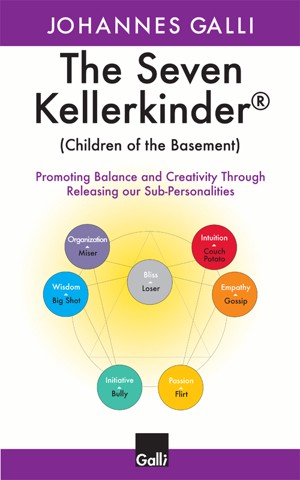 By Johannes Galli
This book guides the reader in a very gentle and intuitive way to face one’s own unconscious in order to better understand and navigate our actions. In-depth exercises allow to ­actively work with the Seven Kellerkinder (seven shadows in our personality) and in the process discover, how easy it is to free them and delight in pure bliss and ­creativity which this joyful process brings. More
Johannes Galli has made in depth studies about human archetypes, which he all describes in this book. He explains his model of his seven basic archetypes and connects it to chakras, the seven days of the week, seven planets, seven deadly sins and many more. The Seven Kellerkinder is a very easy to understand concept about how human emotions function and how we can get in control of them without losing our spontaneity and creativity. On the contrary, the Seven Kellerkinder process helps to become more courageous in daily communication, understand and follow one's impulses, and become a more energetic, healthy and successful person!
Available ebook formats: epub mobi pdf rtf lrf pdb txt html
First 20% Sample: epub mobi (Kindle) lrf more Online Reader
pdb
Price: $5.99 USD
Buy Add to Library Give as a Gift
How gifting works
Create Widget
Tags: drama personal growth dance health therapy personal development acting roleplay enneagram chakras tarot planets dance meditation drama therapy
About Johannes Galli

Johannes Galli was born near Frankfurt, Germany in 1952. He studied literature, philosophy, and history at the University of Freiburg in Breisgau. He put his philosophical ideas on stage and pursued an artistic career as an actor and quickly progressed in European theatre and on the cultural scene. In the 1980s, he was known throughout Europe as “Clown Galli”.
Early in his training he realized, “In acting, the genuine person appears.”
This became the core of his philosophy that has been developed into the Galli Method® (the body language awareness training), which uses the lightheartedness and liveliness of spontaneous role-playing as the basis for personal growth and conflict resolution in the work and private environment.
His diverse creative and artistic work as a philosopher, actor, director, musician, and author has inspired and enthused people worldwide.
Johannes Galli’s method, his books, CDs, videos and theatre scripts are designed to unleash creativity and empower communication skills.
Additional information about the Galli Method® can be found in many books Johannes Galli has authored.

Reviews of The Seven Kellerkinder by Johannes Galli

You have subscribed to Smashwords Alerts new release notifications for Johannes Galli.

You have been added to Johannes Galli's favorite list.

You can also sign-up to receive email notifications whenever Johannes Galli releases a new book.