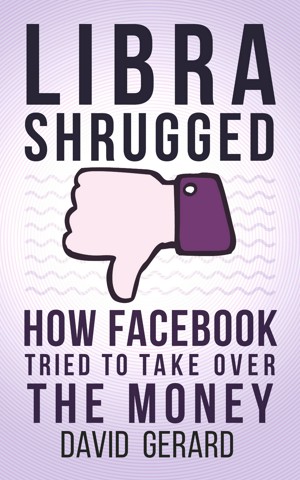 Libra Shrugged: How Facebook Tried to Take Over the Money

By David Gerard
Facebook: the biggest social network in the world. But governments were on Facebook’s case over personal data abuses, election rigging and fake news.

Facebook could have so much power that governments couldn’t stop them. It would be the Silicon Valley dream. More
cSilicon Valley tries to disrupt the world — and the world says “no.”

Facebook could have so much power that governments couldn’t stop them. It would be the Silicon Valley dream.

Facebook launched Libra in June 2019. Libra would be an international currency and payment system. It would flow instantly around the world by phone. It could even “bank the unbanked.” Libra could apparently do all this just by using a “blockchain.”

But Libra would also make Facebook too big to control— and to lead the way for Facebook’s Silicon Valley fellows to swing the power of their money as they pleased. Facebook and their friends could work around any single country’s rules. Libra could shake whole economies.

And Facebook would become the “digital identity” provider to the world. If you wanted to use money at all, you’d have to go through Facebook.

Governments looked at Libra — and they saw another 2008 financial crisis in the making. Facebook’s plan would have made the company even more entrenched — at the cost of broken economies worldwide. Starting with toppling the US dollar.

Libra was as incompetent as it was arrogant — and the world stopped it in its tracks. But how did Facebook put forward such a bizarre and ill-considered plan, that left every regulator who saw it reeling in horror?

And what happens when another company tries the same trick? Or when Facebook won’t take “no” for an answer, and releases the cut-down version that they’re already calling “Libra 2.0”?

“Libra Shrugged” is the story of a bad idea.

Bitcoin and cryptocurrency: the source of all the bad ideas in Libra.
Central Bank Digital Currencies: digital versions of official legal tender, suddenly fashionable again because of Libra.
Facebook’s early forays into payments, with Facebook Credits and Messenger Payments.

David Gerard is a Unix system administrator by day. His job includes keeping track of exciting new technologies and advising against the bad ones. He was previously an award-winning music journalist, and has blogged about music at Rocknerd.co.uk since 2001. He is a volunteer spokesman for Wikipedia, and is on the board of the RationalMedia Foundation, host of skeptical wiki RationalWiki.org. His website is davidgerard.co.uk. He lives in east London with his spouse Arkady and their daughter. Until he reinstalled the laptop they were on, he was the proud owner of six Dogecoins.

Reviews of Libra Shrugged: How Facebook Tried to Take Over the Money by David Gerard

You have subscribed to Smashwords Alerts new release notifications for David Gerard.

You have been added to David Gerard's favorite list.

You can also sign-up to receive email notifications whenever David Gerard releases a new book.