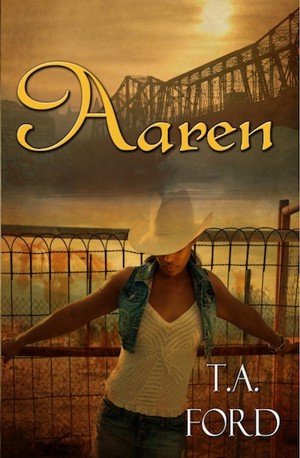 You’ve entered the sensuous realm of Sienna Mynx. An Interracial, multi-cultural chamber of stories featuring women of color in the steamy, passionate, oftentimes complicated love dalliances with the ultimate bad boys. Here I present a tantalizing mix of historical, contemporary, and paranormal romance for the reader that enjoys a pinch of spice, with a extra helping of drama seasoned with a dash of mystery to round out eroticism and romance.

Aaren is the story of a successful businesswoman who must come back to her small, Kentucky hometown to bury her father after he's died. What we don't know, we learn in flashbacks, including Aaren had a man, Jarrod, her first love, who still resides there and who she wants nothing to do with due to their awful demise over fourteen years ago.

I can understand how Aaren would be confused as she's just lost her remaining parent, but I can't understand how she takes everything to such an extreme when it comes to Jarrod. She treats the man like utter crap and won't hear anything he has to say to her and such bullheadedness makes me annoyed.

Then there was the whole "let's be PC and advocate condom usage". First of all, the people who read these novels should be adults and if said adults don't know they should practice safe sex, even with the "loves of their lives" then this book isn't going to set them straight.

I don't know, I am being a bit petty but there are two occasions my pettiness comes out: when a novel tries to get all preachy and sanctimonious, and when a romance novel tries to advocate safe sex. It is FICTION, a fantasy for Pete's sake, we don't need "he grabbed a condom" thrown in before every love scene is consummated.

Other than that, I love this author and think her books are fantastic but the whole "town secret" is anti-climatic to be honest (both my parents hail from Mississippi so this little itty bitty town secret included is nothing to some of the secrets I can tell about my own family) and throwing in the hubby to conjure up yet more drama towards the end was waste of time, space and the book could have ended about twenty pages earlier than it did instead of being dragged on for nothing at all.

Really, really loved this one. I thought that the secrets helped the story along nicely. Thought that the male had double standards when it came to the lies both were telling when the female lead disclosed about her marriage. All in all a good story that moved along at a good pace.

You have subscribed to alerts for Sienna Mynx.

You have been added to Sienna Mynx's favorite list.

You can also sign-up to receive email notifications whenever Sienna Mynx releases a new book.