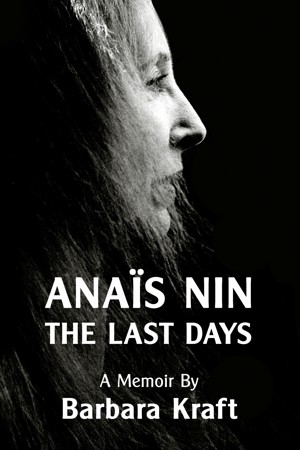 By Barbara Kraft
Anais Nin: The Last Days is a memoir of famed author Anais Nin's last two years of life penned by friend and confidante Barbara Kraft. Nin's stubborn refusal to relinquish her life and the grace with which she died are beautifully and powerfully described in a prose that is sometimes raw, sometimes eloquent, and always poignant. Nin's true character and spirit are unveiled for all to see. More
"I have chosen to reveal the intimacies of Anais Nin's last days as I witnessed them so that the story of her death is not lost. Everything comes back in the mind’s eye. Everything comes back in the crucible of the heart. She remains in my psyche all these years later as the most refined and rarified human being I have ever encountered."

Thus begins Barbara Kraft's memoir, Anais Nin: The Last Days. With her sometimes loving and sometimes raw prose, Kraft has done what no biographer, no scholar, no film could do: capture the humanity, mortality, and essence of one of the twentieth century's most celebrated and yet mysterious literary figures.

Anais Nin, noted for her diaries and erotica, was at the height of her fame when she took on Barbara Kraft as a writing student. Quickly, the two became intimate friends at the moment when both would encounter tragedy: Kraft's impending cataclysmic divorce and Nin's terminal cancer. The circumstances created an environment of interdependency: Nin, despite her failing health, supported Kraft's writing and life decisions, and Kraft became a devoted and untiring part of Nin's support system during her last two years of life.

And, as Kraft observes,

"Illness is the great leveler from which none of us is immune. It flushes out all the old, buried truths and puts us in touch with the essential meaning of things. There is no time, no energy for masks, veils, labyrinths, interior cities, or multiple hearts. Death hovered over her, the one reality that Anaïs could not transcend or transmute or transform or levitate with the magic of words. It was a reality she met with a dignity that tore at the heart of all of us who knew her and were close to her."

Because of the overwhelming reality of cancer, Anais Nin was stripped down to her bare essence, which Kraft captures expertly. She poignantly records not only Nin's stubborn grip on life, but also the heroic efforts that Rupert Pole, Nin's west coast lover, made to shield her from the inevitable pain, agony, and humiliation associated with the disease. It is a monumental tribute to not only those fighting for their lives, but also the forgotten ones--the caregivers.

The very personal events in this book can be appreciated by anyone who has gone through terminal disease or know someone who has. So, like Nin herself, the raw reality of Anais Nin: The Last Days becomes symbolic, mythical, and universally inspirational.

A former reporter for Time, Washington Post, People, USA Today, and Architectural Digest, Barbara Kraft is author of The Restless Spirit: Journal of a Gemini, with a preface by Anais Nin, and the recently published memoir Anais Nin: The Last Days, which Nin biographer Noel Riley Fitch calls "intimate and beautifully written." Kraft's work has appeared in Hudson Review, Michigan Quarterly, and Columbia Magazine, and among the many radio programs she has hosted and produced is Transforming OC, a two-part documentary on the 2006 opening of the Renee and Henry Segerstrom Concert Hall in Costa Mesa. Kraft lives and writes in Los Angeles, California.

You have subscribed to alerts for Barbara Kraft.

You have been added to Barbara Kraft's favorite list.

You can also sign-up to receive email notifications whenever Barbara Kraft releases a new book.