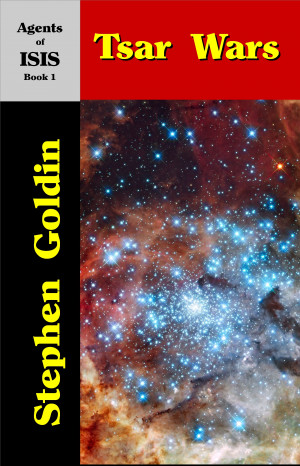 By Stephen Goldin
Rated 4.43/5 based on 7 reviews
With humanity scattered throughout the galaxy, the Empire is the only force for order across the stars. But the tsar's been in a coma for five years, and his grand-niece, the only apparent heir, is only 14 years old. The task of preserving the Empire now falls to two untrained--but far from unskilled--agents of the Imperial Special Investigation Service. Can they save the Empire from destruction? More
Welcome to the first great space opera decalogy of the twenty-first century! Agents of ISIS is the 21st century re-envisioning of the Family d'Alembert series by its original author, an epic saga describing the fight to preserve humanity from the forces of chaos and destruction.

With humanity scattered across the galaxy on hundreds of worlds, the Empire is the only force for order across the stars. Without it, interstellar conflicts would bring chaos and billions of deaths.

But the tsar has been in a coma for five years now, and his grand-niece, the only apparent heir, is only 14 years old. In this hour of crisis, the task of preserving the Empire falls to two untrained--but far from unskilled--agents of the Imperial Special Investigation Service. Can they make a difference against the vast forces arrayed against them?

Review
vondreck reviewed on April 6, 2015
(no rating)
Fast read and kept you involved till the end.

While I am not a fan of reboots normally I decided to give this one a try and I must say it was worth it. I have long been a fan of ee 'doc' smith and find this to be well written and almost seems as if it had come from his pen. The storyline was reminiscent of the original but updated and more developed. I can only hope this author turns his hands to the classic lensman series next and expands that universe. Read this book and also the works of smith. I look forward to reading the rest of the works in this series and others by the same author.

No, thanks. It looks like a Space Opera but is even less than that - a story of treason and revolution, but with the names of planets instead of countries. Novels playing in real history are more enthralling for me. It is not as bad as really bad Ebooks, but I just did not like it. Probably I did not understand what the author wanted to say.

I wasn't sure what to expect going into this story. That turned out to be a good thing because it pulled me along unthinkingly to the end and nothing was quite what I might have expected.

I usually prefer stories that are a little darker/more serious in tone, but this book was just plain fun all the way through. Sure there were dark places, but even those have a lighthearted feel to them.

Tsar Wars felt to me like a fun homage to the over-the-top pulpy science fiction space operas of bygone days. If you like fun adventures set in galactic empires, this book is for you.

I read The Eternity Brigade, by Goldin, years ago when I was just starting to get into science fiction novels. It was nice to rediscover his works.

I couldn't help but smile as I read this book, something I can honestly say is missing often in fiction: real entertainment.

I'm a sucker for a massive, galactic-spanning space opera that has everything but the kitchen sink in it (Star Wars anyone?), so when the tongue-in-cheek Tsar Wars came across my recommendation list, it was a given I'd snap it up.

I enjoyed this book far more than perhaps I should have. Galactic empires, political back-stabbing, genetically engineered secret agents, a princess-in-peril, and ... circus performers? Including a cameo with some otherworldly jaguar-like antagonists? Oooh! Yeah. This book hit a sweet spot that ain't been hit since Princess Leah kissed Luke Skywalker just before swinging across that yawning chasm and said 'good luck!'

Since when did it become not okay to just plain have FUN reading a book? With a happy ending? Why has everything become about some dark, tortured anti-hero? Can't heroes just be heroic because it's the right thing to do? If you enjoyed the light-hearted feel of the first three Star Wars movies (IV-VI)and lamented the loss of both characterization and feel-goodedness (is that even a word?) from the latter three prequels (I-III), then you'll enjoy this book immensely.

And oh, goody ... there are several more books in this series....

What stands out the most to me in this book is the characters. They’re all very distinctive and very entertaining/horrifying/whatever words suits that character the best. They felt real, which is something I personally love in a book. The dialogue also felt natural and appropriate to each characters’ personality.

The plot was fairly predictable in some ways, but not enough to be annoying. That they were going to get from A to B was certain; it was clearly that kind of book; but how they got there was frequently a nice surprise.

I have two minor complaints: A dictionary of the Yiddish terms would’ve been nice, as Google is letting me down on some, and the formatting in the copy I downloaded from Smashwords is a bit weird, with several blank pages and a table of contents that sometimes takes you to the middle of a chapter instead of the beginning. Other than that, this is best space opera I’ve read in ages.

I found this an enjoyable and quick read - it's very lighthearted and fun, considering the proportion of the time that the characters are in fear for their lives. I'll definitely look out for others in the series.

I am a space opera fan and was glad to hear about this series by Stephen Goldin.

Having read the Family D'Alembert series many times over the years it was with much anticipation that I started to read Tsar Wars.

I was not disappointed. A story that is both new and familiar at the same time it kept me spellbound until the end.

I do not wish to say too much as I do not want to spoil the pleasure you will get from reading this for the first time just make sure you have time to spare when you start reading as you will not want to put it down.