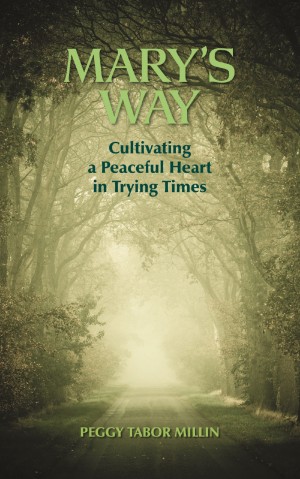 By Peggy Tabor Millin
Join Peggy Tabor Millin on a journey of transformation, divine love, and deep spiritual connections. Inspired by her life-changing pilgrimage to Medjugorje, Bosnia, in 1989, she authored "Mary's Way: Cultivating a Peaceful Heart in Trying Times." Now, thirty years after Mary, mother of Jesus, first appeared in Medjugorje, "Mary's Way" has been reprinted so we can all cultivate a peaceful heart. More
In 1989, Peggy Tabor Millin joined a group of non-Catholics as chronicler on a pilgrimage to Medjugorje, Bosnia, where Mary, mother of Jesus, had been appearing to a group of young people since 1981. Although she did not expect to be affected by her journey, what occurred changed her life, leading her along a path she calls "Mary's Way." Twenty years later, she understood that Mary had been appearing in order to prepare us for what is happening now. Millin then knew she was to republish the book with a new subtitle to reflect the intent of the messages: Cultivating a Peaceful Heart in Trying Times.

This is a book about spiritual connections, about the use of Mary's Way in opening a deep communion with divine love, and about the possibility of transformation in our daily lives. Mary's message is universal--individuals from all religious and spiritual paths will find guidance and inspiration.

Millin writes, "The spiritual journey has no goal, nothing tangible to grasp, not even a permanent state of being. Enlightenment comes in flashes of in-sight that last as long as they last. Such flashes arise from shifting our focus from the material world to the inner life of the soul. Our outer life then becomes a reflection of our inner reality: increasingly the heart rests in peace and selfless service replaces striving. This shift in focus rearranges our priorities; we give up what no longer serves this higher purpose and are occasionally surprised by glimpses of the resplendent 'pearl of great price'."

Peggy Tabor Millin is the author of the award winning book, "Women, Writing, and Soul-Making: Creativity and the Sacred Feminine." Through programs in the written word she provides a safe space for women to develop and claim their voice so they can stand in their power and inspire positive change in their world. View photos of the pilgrimage and information about her programs and publications at clarityworksonline.com

"We never touch people so lightly that we do not leave a trace."
-from the book "Mary's Way" by Peggy Tabor Millin, and quoted on the Oprah show.

Peggy Tabor Millin facilitates women in the writing process at regional and national workshops and retreats. Based in Durham, North Carolina, she also teaches for retreat centers and for other programs such as Great Smokies Writing Program at University of North Carolina, Asheville; North Carolina Writers Network; Mountain Area Health Education Center, Asheville; and the Institute for the Advancement of Service, Alexandria, Virginia. An engaging speaker, she addresses conventions and organizations interested in creativity, writing and spirituality, women's health, and the healing power of writing.

Peggy combines her knowledge as a writer and writing coach with enthusiasm and humor. She conveys the message that when writers focus on telling their personal truths, rather than on publication, the quality of their writing soars and impacts the quality of their lives in a positive way.

In 2010, Peggy was awarded the Next Generation Indie Book Award for her nonfiction book, Women, Writing, and Soul-Making: Creativity and the Sacred Feminine. The Independent Book Publishing Professionals Group (IBPPG) announced the awards in New York City on May 21.

In addition to her current book, Millin is author of Mary's Way. That book gained attention when a quotation from it was used by Oprah on her show. The quote, "We never touch people so lightly that we do not leave a trace," now boasts over a half million hits on Google.

Millin has also published short fiction, nonfiction, and poetry in various national and international literary journals and magazines, including Thema and the Smithsonian's Native Peoples. She recently released Family Matters: The Power of the Personal Story, an audio memoir workshop.

She holds a BA in English from UC Berkeley and an MA in the psychoneurology of learning and communication disorders from Northwestern University. She has been teaching through ClarityWorks, Inc. for over twelve years. Prior work was undertaken at the Institute of Neurological Sciences,University of Pacific, San Francisco; Department of Rehabilitation, University of Arizona, Tucson, and Cherokee Central Schools, Eastern Band of Cherokee Indians, Cherokee, NC.

You have subscribed to alerts for Peggy Tabor Millin.

You have been added to Peggy Tabor Millin's favorite list.

You can also sign-up to receive email notifications whenever Peggy Tabor Millin releases a new book.