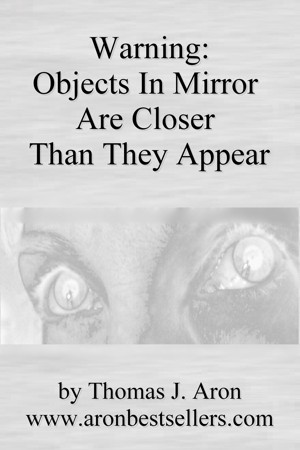 Warning: Objects In Mirror Are Closer Than They Appear

Contrary to the advice of his father, Thomas J. Aron became a lawyer and spent twenty-seven years proving that old Dad was right. One of the major accomplishments of his law career was the collection of experiences that have become the basis of his writing. Sour Rain has its roots in his experience as the Assistant District Attorney in Juneau. He left the law in 1994 to pursue his love of writing.

Aron began writing for newspapers at age ten and continued this interest as an avocation until his mid-50s. He was the primary contributor to a 1989 news series about Denver’s controversial Two Forks Dam. It was awarded Best Series by the Colorado Press Association.

For nine years, he wrote Headgate, a monthly magazine column about water resources. His environmental reporting was highlighted by a 1995 story about pollution of a naturally pure underground water supply by a municipal sewage plan.

The manuscript of his 1996 novel, The Dam, was used by a citizen-activist group to help expose the deterioration of a major Western reservoir. A tribute to a childhood mentor was published in 1997 as The Legend of Ernie The Bear.

Warning: Objects In Mirror Are Closer Than They Appear
Experience one night of fear as seen through the eyes of a DA, Robert Anderson. Something has gone terribly wrong in his best efforts to free his defendant. What could have possibly happened?

The opening is a long series of disconnected, leaden paragraphs that called the same people different things. The opening left me completely confused as to who was who, how they interrelated, and what events had already happened and in what order.

You have subscribed to alerts for Thomas J. Aron.

You have been added to Thomas J. Aron's favorite list.

You can also sign-up to receive email notifications whenever Thomas J. Aron releases a new book.