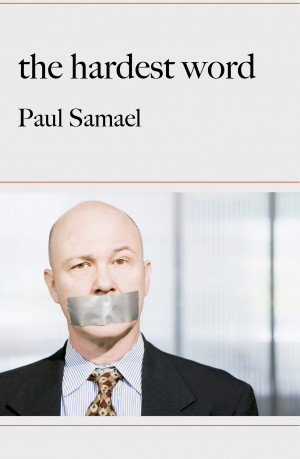 Reviews of The Hardest Word by Paul Samael

I admit it wasn’t until the end of the story that I fully appreciated the import of the title, which places the action in the context of a morality play. To that point, possibly quite contrary to the author’s intention, I felt more sympathy for the banker than his abductors. Even in the face of physical danger, this particular banker refuses to accept the simplistic contention that it was the bankers alone who screwed up, sending the world economy to the brink of collapse; in fact he does a quite adequate, if not admirable, job of defending his position. I would add that he might have asked his accusers why they did not also wish to indict the politicians who, in this country at least, forced the banks to give mortgages to persons having no reasonable expectation of ever being able to repay them; meanwhile, supposedly savvy investors carelessly flipped house after ever costlier house, riding an unsustainable manic debt escalator that somehow was supposed to end up making them all rich and richer. (The unstated irony—if one wishes to call it that—brought to the fore by the story is that no sooner have we begun to recover from being driven over one fiscal cliff than certain members of our political class appear all-too-eager and even determined to push us over another.) Of course, the bankers were all-too-happy to make those questionable loans—because they could bundle them together and pass them off on unwary or oblivious investors all-too-willing to buy them up—as long as they continued to provide a healthy return. In truth, there was more than enough greed and incompetence to go around and it seems to me unfair to single out and vilify any one group in particular for the subsequent inflation and inevitable bursting of this real-estate and equity market bubble. And yet, however sympathetic I may initially have been to the banker’s point of view, his attitude at the end is entirely intolerable, making me want to reexamine all of my prior assumptions.

This story of a kidnapping would make a great one-act play. The action is concise, the dialog compelling, as three men, frustrated with how the white-collar bankers who caused the recent financial collapse have gotten away free and clear, decide to teach one of them a lesson. Soon it's not clear who is teaching who, or what the lessons really are, or even if anyone can truly teach anyone else anything, so tenaciously we all cling to our opinions and belief systems. The story manages to capture all these aspects in a fast-moving, tense and compelling drama.