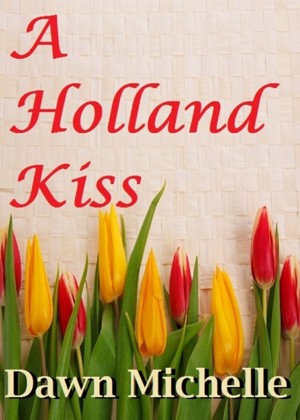 As the world's largest Dutch kissing couple, Dutch and Tulip are the larger-than-life version of the cute little statues you see in people's yards. For decades, Dutch and Tulip have stood at the entrance to the town park, blessing couples as they married under their loving eyes.

They are Holland, Indiana's claim to fame. But when a storm damages Dutch, the small town considers selling the aging couple.

Discovering that Dutch and Tulip are in danger, Lily Mein knows she must save them and her own dream of getting married beneath the 57-foot couple.
Problem is...not everyone wants Dutch and Tulip saved.
Even bigger problem...Lily has no groom. Oh sure, she's found one; he just doesn't know it yet.
Download: epub mobi (Kindle) pdf more Online Reader
rtf lrf pdb txt
Price: Free! USD
Add to Library
Create Widget
Tags: romance love comedy small town kissing dutch tulip
About Dawn Michelle

CONNECT WITH DUTCH AND TULIP
If you enjoyed Dutch and Tulip let them know by visiting their Facebook page or drop them a line at dutchandtulip@live.com
Tulip loves making friends and Dutch...Well, Dutch just wants a kiss.
There are more adventures on the way for Dutch and Tulip. Look for their next story,
A HOLLAND FURST coming Fall 2012

Love and much kissing,
Dawn

Reviews of A Holland Kiss by Dawn Michelle

This is a charming story about Lily, a resident of small town Holland, Indiana, and her quest to save Holland’s huge landmark Dutch and Tulip statues from being sold. I especially like how each chapter begins with an imagining of what the pair of statues might be saying to one another, about events unfolding in the plot, as well as about Dutch’s hungering for a kiss and Tulip’s wanting her flowers. The plot follows the statues’ imminent sale, which would deprive Holland of its most famous landmark, underneath which many couples have kissed and married. Lily feels passionate about keeping the statues in Holland, but a council member has another idea. The story follows Lily’s work gaining the public’s support and raising money for the statues’ restoration, as well as her being targeted by nefarious forces who have other plans for the statues. Meanwhile, a love story also unfolds between Lily and her lifelong crush, Jay, who she is madly in love with. Overall, this was a pleasant read, I found myself wanting to return to the small town world of Dutch and Tulip to continue the story.

This is a charming tale-I like the cover too!

I really enjoyed this, something different.

Always nice to see free books that are written well!

One of the best writing styles that I saw in a long time - keep them coming Dawn I can't wait to read your next book!

For a very long time I've been bypassing this book. I'm not sure what I expected but definitely not this. Lily was a very funny character and most times I couldn't help laughing cos of the kind of thoughts that go through her mind. Ruth was another funny charcter, she might be old but she certainly loved having fun. Overall, it was a great book with wonderful characters, by the way, I actually loved Jay and Jonas and right now I'm craving A Holland Furst. Great job Dawn.

When I saw that it was about statues I ignored it for the last two years. But I finally gave in and read and it is the best modern fictional writing style I have seen in a long time - you become so consumed with the characters- not just one narrating. There were points when I wanted her to be with Jay then points when I thought maybe Jonas and points when I wanted her with neither. The book actually had be so emotionally conflicted and interested in these characters. I'm looking forward to the overdue Holland Furst. I want to know about every other character in the book and their own stories.

I love your writing style. The story was sweet for both Lily and Dutch and Tulip and I ended up with a goofy grin for ages after finishing it. This is also one of the few books that have actually made me laugh out loud due to Lily's descriptions and thought processes! Altogether, a thoroughly enjoyable read.

You have subscribed to alerts for Dawn Michelle.

You have been added to Dawn Michelle's favorite list.

You can also sign-up to receive email notifications whenever Dawn Michelle releases a new book.