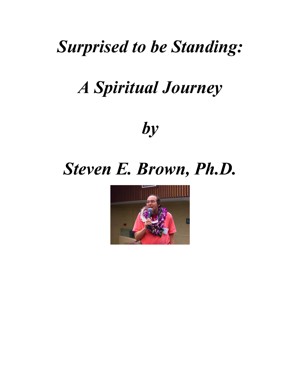 Surprised to be Standing: A Spiritual Journey

By Steven Brown
In "Surprised to be Standing: A Spiritual Journey," Steven E. Brown explores living with a disability from the age of five, becoming a pioneer in promoting Disability Culture, and finding himself on an unexpected and astounding healing journey. More
A mysterious limp when Brown was five was diagnosed as a rare genetic disease, foreshadowing decades of excruciating bone pain and accelerating immobility. In his mid-forties not even the most sophisticated medical technology could detect his bone density, which led to Brown's digging deep inside to tackle longstanding, but often ignored, personal angers and sorrows and choosing between submitting to a life of ongoing pain and desperation or healing and liberation.
Available ebook formats: epub mobi pdf rtf lrf pdb txt html
First 20% Sample: epub mobi (Kindle) lrf more Online Reader
pdb
Price: $9.99 USD
Buy Add to Library Give as a Gift
How gifting works
Create Widget
Tags: memoir disability rights disability culture reconnective therapy gaucher disease
About Steven Brown

Brown encountered disability-based employment discrimination based shortly after earning his doctorate, which changed his career path. In the 1980s, Brown worked at and directed an independent living center in Oklahoma, organized numerous community advocacy coalitions, and represented regional Independent Living Centers in legislative education about the passage of the Americans with Disabilities Act. In 1990, Brown moved to California to become Training Director at the World Institute on Disability (WID). In 1993, Brown received the first federal funding to research disability culture, which resulted in the monograph, Investigating A Culture of Disability: Final Report.

After relocating to New Mexico, with his wife and partner Lillian Gonzales Brown, in 1994, they co-founded the non-profit Institute on Disability Culture. In 2002, they moved to Hawaii, where Brown joined the Center on Disability Studies (CDS).

Brown has published many articles about disability rights and is a national and international speaker. His books include Movie Stars and Sensuous Scars: Essays on the Journey from Disability Shame to Disability Pride (2003); Surprised to be Standing: A Spiritual Journey (2011); and Ed Roberts: Wheelchair Genius (2015), a Middle Grade biography of the late 20th century disability rights pioneer. He is also a co-editor of the anthology, Rethinking Disability: World Perspectives in Culture and Society (2016). He has presented on disability rights and culture throughout the U.S. and in Canada, Germany, Hungary, Japan, Norway, Saipan, Sweden, and Taiwan.

Brown relocated to the California Bay Area in 2014, after retiring from CDS. He continues to write, advocate, speak, and teach (including via the University of Hawaii, online courses he created, at both the undergraduate and graduate levels.

Brown&#39;s work remains driven by the Institute on Disability Culture mission/vision: &quot;Promoting pride in the history, activities, and cultural identity of individuals with disabilities throughout the world.&quot;

Brown blogs periodically at http://www.instituteondisabilityculture.org/manifesto and is on Twitter @disculture.

Reviews of Surprised to be Standing: A Spiritual Journey by Steven Brown

You have subscribed to Smashwords Alerts new release notifications for Steven Brown.

You have been added to Steven Brown's favorite list.

You can also sign-up to receive email notifications whenever Steven Brown releases a new book.