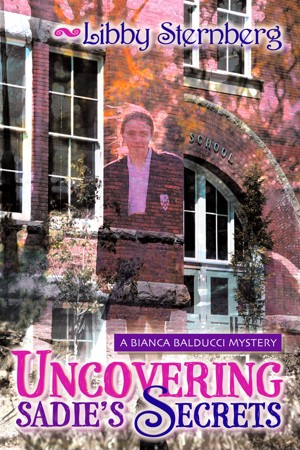 By Libby Sternberg
Allow us to introduce Bianca Balducci, a normal fifteen-year-old girl attending a co-ed parochial school in Baltimore, Maryland. She worries about her hair, her clothes, her would-be boyfriend Doug . . . and solving mysteries.

There's something strange about new girl Sadie Sinclair. Why is Sadie being stalked by a nefarious duo of grown-ups?

An Edgar Award finalist and a delightful mystery.

Libby Malin Sternberg was born and raised in Baltimore, Maryland and is still in love with the city of crabcakes, steamy summers, and ethnic neighborhoods. (What’s not to love about a city that names its football team after an Edgar Allan Poe character?)

Libby earned both bachelor’s and master’s degrees from the Peabody Conservatory of Music and also attended the summer American School of Music in Fontainebleau, France.

After graduating from Peabody, she worked as a Spanish gypsy, a Russian courtier, a Middle-Eastern slave, a Japanese Geisha, a Chinese peasant, and a French courtesan--that is, she sang as a union chorister in both Baltimore and Washington Operas, where she regularly had the thrill of walking through the stage doors of the Kennedy Center Opera House before being costumed and wigged for performance. She also sang with small opera and choral companies in the region.

Alas, singing didn’t pay all the bills so she turned to writing, working in a public relations office and then as a freelancer for various trade organizations and small newspapers.

During a period of self-unemployment, she took her sister’s advice and decided to pursue an unfulfilled dream--writing fiction. Her first young adult novel, Uncovering Sadie’s Secrets, was a nominee for the prestigious Edgar Allan Poe award from Mystery Writers of America. The second in that mystery series was released in hardcover in November 2004. A third mystery in the series was released in 2008. She's also written a historical YA mystery, The Case Against My Brother. She is the author of two women's fiction books (writing as Libby Malin)--Loves Me, Loves Me Not and Fire Me!--and is under contract for a third. All of her books have received critical acclaim.

For many years, she and her family lived in Vermont, where she worked as an education reform advocate, contributed occasional commentaries to Vermont Public Radio and was a member of the Vermont Commission on Women.

She is married, with three children, and now resides in Lancaster, Pennsylvania.

You have subscribed to alerts for Libby Sternberg.

You have been added to Libby Sternberg's favorite list.

You can also sign-up to receive email notifications whenever Libby Sternberg releases a new book.