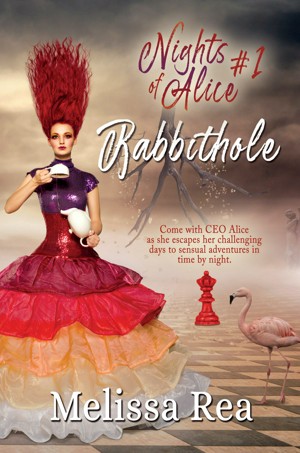 CEO Alice slips on clothes she finds in her closet and is off each night to a sensual adventure somewhere in time. After her company's secrets are stolen, she has to save the career that defines her and choose between her fantasies and the real men in her life. More
Last night, clothes began appearing in Alice Hightower’s closet at sunset. She might find bell bottoms from the seventies or a beaded flapper’s dress from the twenties, but they fit perfectly. She slips on the outfits and opens her balcony door to another place and time where extraordinary men fill her nights. CEO of a medical device company about to unveil a revolutionary heart bypass product, Alice escapes her challenging days to the adventures beyond her balcony door. How could her smoldering VP of sales, or her fascinating assistant compare to Tweedle Don and Tweedle Dan, twin doctors from the seventies, or the sixties rock group who scolds Alice for being late for their very important date. At forty-nine, after two divorces, relating to her male coworkers has been entirely too complicated. After industrial espionage threatens her company, Alice has to save the position that defines her, discover the truth of her fantastic travels and decide if the real men in her life might be more satisfying than those she enjoys by night.
Available ebook formats: epub
Price: $4.99 USD
Buy Add to Library Give as a Gift
How gifting works
Create Widget
Tags: romance erotic love women fantasy passion mainstream ceo
About Melissa Rea

As a little girl, Melissa Rea would fall asleep whispering stories to herself in the dark. She got in to trouble in elementary school for embellishing when the truth just seemed too mundane. She grew up and the stories became just daydreams and she pursued a sensible career. Melissa filled her spare time with the wondrous worlds of Bram Stoker, Mary Shelly, Robert Heinlein, Philippa Gregory, Stephen King, Dean Coontz, Jackie Collins, Jennifer Weiner, Sarah Dunant and any and all authors who caught her fancy. And still, the stories in her head were there, now influenced by the delicious words of others. One day, the stories could no longer be contained, and she began to write novels. Conjuring Casanova was published in 2016 and was a Recommended Idie Book by Kirkus Review. It won first place in the Beverly Hills International Book Awards for Romantic Comedy, a first place in ReadersViews Reviewers Choice Awards for Romance and was a finalist in Forward Reviews Book of the Year in the Romance category. She lives in St. Louis where she has a solo dental practice and lives with her husband and rescue cats.

About the Series: Nights of Alice

Reviews of Rabbithole by Melissa Rea

You have subscribed to alerts for Melissa Rea.

You have been added to Melissa Rea's favorite list.

You can also sign-up to receive email notifications whenever Melissa Rea releases a new book.