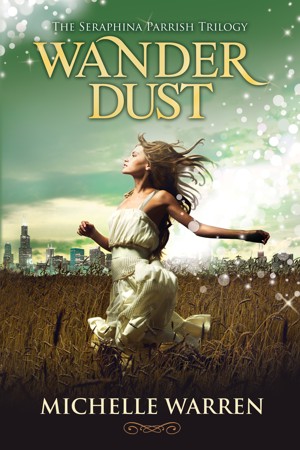 By Michelle Warren
Rated 4.33/5 based on 3 reviews
Wander Dust is the breathtaking fantasy that will catapult you through a story of time, adventure, and love. More
Ever since her sixteenth birthday, strange things keep happening to Seraphina Parrish. Unexplainable premonitions catapult her to faraway cities. A street gang wants to kill her, and a beautiful, mysterious boy stalks her.

But when Sera moves to Chicago, and her aunt reveals their family connection to a centuries old, secret society, she’s immediately thrust into an unbelievable fantasy world, leading her on a quest to unravel the mysteries that plague her. In the end, their meanings crash into an epic struggle of loyalty and betrayal, and she’ll be forced to choose between the boy who has stolen her heart and the thing she desires most.

Michelle Warren didn’t travel the road to writer immediately. First, she spent over a decade as professional illustrator and designer. Her artistic creativity combined with her love of science fiction, paranormal, and fantasy led her to write her first YA novel. Michelle loves reading and traveling to places that inspire her to create. She resides in Maryland, in a historic Baltimore row-home, with her wonderful husband.

I honestly reviewed this book for my stop on the blog tour.

Seraphina has to have had the most depressing sixteenth birthday ever. She's at a restaurant with her father and his girlfriend, and he's so into his girlfriend, he barely noticed his own daughter. On her birthday!! He also doesn't notice Sera is almost set on fire by her own birthday candles! Suffice it to say, I couldn't stand Sera's father - he's cold and completely uncaring. Not like a father should be at all. I really didn't like him.

Sera's sixteenth birthday is when everything begins. She sees the Lady in Black for the first time at the restaurant, leading her to have nightmares about this Lady setting fire on her house. Then other strange things begin happening to her, and she started thinking she might be going crazy. That's exactly what I'd think about myself, too! At a certain point, though, I'd start asking my father some questions.

Sera's mother died in a car accident a long time ago - before Sera had a chance to get to know her at all. If you've read some of my past reviews, you know this immediately endeared me to her character. I completely understood this character although I was lucky enough to have a. known my mom and b. had a loving father.

One random day, Sera's father decides she should go live with her mother's sister. I was so happy to meet Mona - she's a breath of fresh air in Sera's life. While I was sad for Sera because she couldn't believe her father was shipping her off, I also felt this was a decision that ended up benefiting her. Her father wasn't the parent that she needed him to be, and by living with Mona, she would be able to learn more about her mother.

All in all, Wander Dust was a great read. I connected with Seraphina right away, and while I felt like she should have suspected something magical was happening to her a while ago, I also understood the fear that she might be going crazy instead. I love reading stories with time travel - it was a lot of fun for me that time travel is included in this story. I loved the romance, and I'm excited to read the rest of this trilogy!

This book is like a gateway drug... I loved it and went straight towards book two. A sweet story about a young girl called to her destiny, fun to read great to share. Now why do I say a gateway drug you might ask. Book Two "Protecting Truth" is positively ADDICTING! I have read them both more then once now and hope that she is working fast and studiously on book 3!!

The story is beautiful, well written and full of mysteries. I love the concept of a team of 3--Wanderer, Seer and Protector and what they were learning in their special school just for them.

Seraphina (or Sera for short) was just a normal girl celebrating her 16th birthday with her father, Ray, and his girlfriend, Maddi. Or so she thought until she saw the flames of her birthday candles flickering back to life in water and then some lady in black traumatizing her by just gazing at her. The experience left her unconscious. She thought she was hallucinating when that was not her only encounter with the lady in black. If you think that was weird, what do you think of Sera whisking into some other places by just wearing her late mom's bracelet (the birthday present from Ray)? Not to mention everybody she saw there was wearing stuffs that were over 20 years ago. Definitely weird huh?

A letter arrived for Sera when she came back from her little journey. There was only a torn photograph of a boy inside it and nothing else. She's captivated by what she saw and the sense of calmness she had whenever she gazed at the picture.

Sera was sent to her Aunt Mona's place after getting into some troubles in school. On her journey there alone, she was attacked by the "he grungy gang" and that was when she first met the boy in the photo. She continued to see him stalking her outside her school while she was having classes. She mustered her courage after a few days to face the guy and talked to him and was thus introduced to the term "Wandering" and there she met her team mates--a Seer and a Protector after she had transferred school. (Can't tell you who!)

Then, she learnt that she can wander back in time to see her mother and to save her! Hence, she had a mission...

Michelle Warren did a great job in introducing the concept of Wandering to us, together with the world that she has created. There was never a moment that I felt the story dull or the pacing slow when I read the book. Definitely worth a read. Here's a little teaser for you:

"I wish you wouldn't have given the sundial bracelet to Terease"

"Why?" I question and press my head onto his chest, pushing my arms back into his open jacket and around his back.

"If I had it to lead me to my deepest desire, I know it would always be a direct path to you."

What are you waiting for? Grab a copy if you haven't done so! Join Sera as she learn what Wandering is all about and follow her on her mission to go back in time to save her mother. Will she be successful? Read to find out!

And I'm very excited for the second book.

You have subscribed to alerts for Michelle Warren.

You have been added to Michelle Warren's favorite list.

You can also sign-up to receive email notifications whenever Michelle Warren releases a new book.