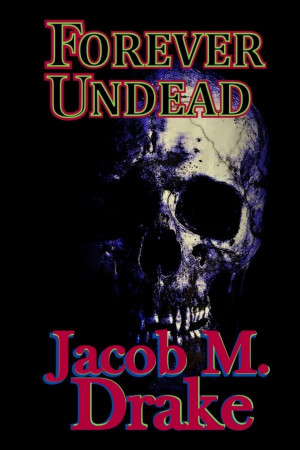 By Jacob M. Drake
Rated 4.50/5 based on 6 reviews
When a family man finds his less-than-perfect life turned completely upside down by his becoming a vampire everything he knows and values is called into question, especially when other vampires expect him to assist them in staging a coup that will result in the ravaging and enslavement of all humans. He must then decide what it means for him to live forever.

Jacob Drake is the author of various Fantasy, Horror, Science Fiction and Erotica books, all available on Smashwords. His only problem in writing is not having enough time to write to completion all the stories he gets in his head. "If I wrote constantly until the day I died I still would never be able to exhaust the imagination that is the source of these stories.

"I've always loved reading, so somewhere along the line it only seemed natural that I would sit down and start writing the type of stories I like to read. And that's only because I can't always find a book I want to read that encompasses the type of story I want. Sure, there are lots of great authors out there, but they don't always have their next new novel in my hands at the time I want to read it. Certainly there won't ever be another new book by Robert Heinlein or Isaac Asimov, though I wish with all that's in me there were.

"I wrote my first story in high school for an English class. Had no idea what I was going to write until Sunday night (This was due the next day) when I sat down at my typewriter (Yes, this was back in the Stone Age before PCs came available) and started pounding on the keys. I turned in the finished story the next day and received an "A".

"But I didn't write anything else (except songs, of which I have more than 100 finished) for many years, mostly due to the fact of raising a family and trying to be responsible (I hate that word). That came about because I had a story in me banging at the inside of my head, demanding to be let out. This time I sat down at the keyboard at my PC and began writing. I don't recall how long it took to complete that story, but it's now published as "Parallels: Book One - Heroes Enjoined Series".

"I was quite satisfied with how that turned out, so a bit later I wrote the sequel to that book and called it "XKALIBUR". I then wrote a smattering of horror stories as well as a few more books and then a bunch of stories based on female superheroes who get into - ahem - trouble each and every time they go out on patrol.

"But none of these stories ever saw publication and that was okay with me (to a point), because I realized that deep down inside of me I was a writer and I had stories that kept screaming at me to write them. So I did, even though I had nowhere to publish them. My wife well knows how many times I said, "I just want my stories out somewhere so other people can read them! What good does it do if they sit on my computer and no one else can enjoy them?"

"I tried getting book publishers interested in my works, but they wouldn't even deign to read my intro letter. Many other authors know that feeling, too. I attempted to get an agent, with pretty much the same results. Most agents are too busy trying to place the stories for the author's they already represent.

"I then read something on the internet one day while searching for online publishers. Someone had published his story at a place called Smashwords.com and it hadn't cost him a cent. I don't recall who that was, but I wish I could thank him for having the sense to write that blurb where I could read it.

"I entered the name into my browser bar and hit "enter". Sure, I had to register, but that was free, so I did. Figuring out how to get my stories formatted properly in order to get them uploaded onto Smashwords was a bit of a chore, but Mark Coker's Style Guide was pretty much clear on the subject and eventually I had it all done for my first book.

"Once "Parallels" was published online I was like a little kid on Christmas morning with a tree filled with presents underneath.

"Within the next month I had all of my completed stories formatted and uploaded, which meant I had to take all my horror stories and put them together with a book title. Then I had to do the same for my B.A.B.E.S. stories, but that worked easy enough, once I figured out what program to use (Picasa3) to make covers with.

"Now I work on getting my latest novels written so they can join the rest of my 'family' of eBooks that are now available on all the eBook retailers' sites.

"Not all of my books are for everyone, especially my erotica classifications, like the "Complete Book of B.A.B.E.S." and my "Rebirth of the Gods" book. Some day I'll get around to writing the promised second book to that series, honest. For the time being, I've been channeling my energy into writing the books for my vampire series, the first of which is "Forever Undead" and the second one is "Darkness in the Light". Now I have the third in this series, "Forever the Dark Grave", and then I'll write "Darkness in the Draca Legacy". After that I'll link these all together with "Forever Darkness". Recently I got the idea of writing a bunch of short stories based on the vampire bar (Vampir Sange) that appears in "Darkness in the Light" and publishing it under the title "Vampir Sange - Dark Tales From the Blood Bar". That one will be written.

"I'm enjoying my vampire realms too much to do anything else right now, but I am open to hearing from those who read my books."

Care to write and make suggestions? You can reach me at: eternal.naturist2@gmail.com

this book was a very easy read. loved the humorous touches as phoenix and cindy learned about their new vampire existence. i'll be reading more of jake's books.

I really enjoyed the story and characters. The hero is a refreshing change from the teen vampire genre. The bok suffers a bit from the obvious lack of judicious editing. A few small things such as changing a phrase here and there to avoid repetition and some cutting of long scenes would earn a fourth star. will definitely check out the authors other work.

I've only read through the first few chapters so far since downloading this book today, but I like how the protagonist is made to look as human as the rest of us. Way to treat that "chester". Makes me wish I could be a vampire so I could rid the world of human garbage too.

The torture chamber scenes had me riveted to the pages. I like to see stories where the main characters look as though they may not make it through at all. Makes it more suspenseful for me. What a perfectly superb villain in Cyrus.

What a great change from all the "vegetarian" vampire fluff that's flooding the market. Finally someone who has the guts to make vampires what they are - savage bloodsuckers. I hope to see more of this author's work in this genre.

This is a refreshing change from all the "new teenage" vampire crap the media is forcing down our throats. Jacob Drake has given us a truly wicked vampire story wherein those who are of the undead believe they are the true rulers of this world - and are about to prove it.
In Live Forever, Jacob Drake shows us what it might be like were we to "wake up" one night and find that we have been turned into a creature of the eternal night. What would you do? Jacob attempts to answer that very question in this chilling story of the undead realm.

You have subscribed to alerts for Jacob M. Drake.

You have been added to Jacob M. Drake's favorite list.

You can also sign-up to receive email notifications whenever Jacob M. Drake releases a new book.