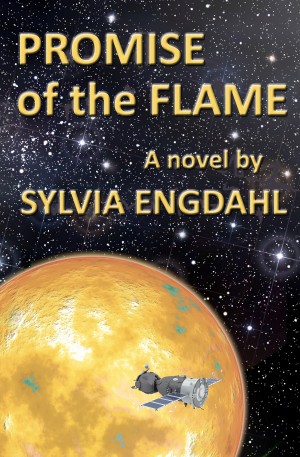 Promise of the Flame

By Sylvia Engdahl
Three hundred people, isolated on a raw new planet in the hope that their psi powers will become the foundation of a culture that can someday shape the future of humankind. If they don’t starve first or lose heart in the face of hardships beyond any they imagined--and if their kids can be raised to believe in the dream. Though a sequel to Stewards of the Flame, this novel is complete in itself. More
Three hundred people in a starship low on life support -- they must land fast, or they’ll run out of air. Captain Jesse Sanders is their only pilot. How can he choose where to locate their colony with no chance to explore the raw new world? How can he shuttle them all to the surface within a few short hours? And when the site proves less than adequate, how can he live with the knowledge that his own astrogation error was what got them into such a fix?

Isolated by choice on a world they have reached in secret, the colonists hope to establish a culture based on psi powers that can someday shape the future of humankind. If they don't starve first. And if they don't lose heart in the face of hardships beyond any they imagined. Jesse hasn't expected to be responsible for the settlement. Peter is the leader, the visionary on whose inspiration they all depend. But Peter has his hands full, not only with maintaining morale but with a grueling ordeal of his own. So the job of ensuring the colony's survival falls on Jesse. And in the end, he must stake his life in a desperate attempt to prevent the loss of all they have gained.

Although this is the second book in the Hidden Flame duology, it is an independent story that can stand alone -- the two novels are in many respects quite different. However, reading them in reverse order will affect some of the earlier book's suspense. Please note: Unlike some of Sylvia Engdahl’s previous novels, this is not a Young Adult book and is not appropriate for middle-school readers.

“It is not necessary to read the first [book] in order to be enthralled by the second. . . . Engdahl’s gift is to make her characters seem comfortable and familiar to the reader, even though their circumstances are not. Although clearly a work of science fiction, the ideas and futuristic possibilities are disturbingly real and will remain with the reader long after they’ve finished the book.” —IndieReader Staff Review

“I think I actually like Promise of the Flame even more than Stewards of the Flame. In the first book, the idealist philosophy was created in opposition to the bounds of their society. However, in the sequel, the characters have to balance survival (short and long term) with these ideals. Definitely not an easy task.” —TCM Reviews

“Outsoars its predecessor. . . . As with all of Engdahl’s work, science-fiction fans will recognize the tropes she uses, but it is not just ‘for’ them, no more than the work of a great artist who happens to work in, say, ceramics is just for adepts of that medium. Engdahl has produced high-quality work over a forty-year period, but this is one of her finest achievements.” —Nicholas Birns (author of Understanding Anthony Powell)

Sylvia Engdahl is the author of ten science fiction novels. She is best known for her six traditionally-published Young Adult novels that are also enjoyed by adults. One of them, Enchantress from the Stars, was a Newbery Honor book, winner of the 2000 Phoenix Award of the Children's Literature Association, and a finalist for the 2002 Book Sense Book of the Year in the Rediscovery category. Her Children of the Star trilogy, originally written for teens, was republished as adult SF.

Recently she has written four independently-published novels for adults, the Hidden Flame dulogy and the RIsing Flame duology. Although all her novels take place in the distant future on hypothetical worlds and thus are categorized as science fiction, they are are directed more to mainstream readers than to avid science fiction fans.

Engdahl has also issued an updated edition of her 1974 nonfiction book The Planet-Girded Suns: The Long History of Belief in Exoplanets, which is focused on original research in primary sources of the 17th through early 20th centuries. In addition she has published three collections of essays.

Now retired, she lives in Eugene, Oregon and welcomes visitors to her website at www.sylviaengdahl.com. It includes a large section on space colonization, of which she is a strong advocate, as well as detailed information about her books. She enjoys receiving email from her readers.

About the Series: The Hidden Flame

The first of two Flame duologies, complete in itself as the second one is an independent story. Book 2 is this duology is quite different from Book 1 and contains enough backstory to be read alone.

Also in Series: The Hidden Flame

You have subscribed to alerts for Sylvia Engdahl.

You have been added to Sylvia Engdahl's favorite list.

You can also sign-up to receive email notifications whenever Sylvia Engdahl releases a new book.