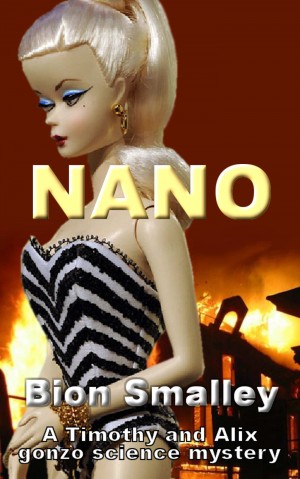 Bion Smalley lives in Tucson, Arizona, with his wife Carol and an acre and a half of cactus.

I've just finished reading Nano. I will never, not ever, be able to look at a Barbie doll again in the same way! Mr. Smalley, you have forever ruined the name, the image, the icon that is or should I say was... Barbie. What a ride!

My only objection with the sexually rabid (at least not explicit) middle aged protagonists Timothy and Alix was their given ages. It felt like their ethos were more akin to those who're mid-twenty something, maybe just going into 30 rather than the given mid thirties and 40 years old. Beyond that, this was a fun rollicking good story.

I enjoyed the many "unique" characters that play throughout. You will meet along the way with the usual uptight academic, a peculiar loveable professor, the mobster and thugs, errant parent, a covert group of government agency, as well as (one of my favorites) Weisenheimer and of course the grotesque mondo Barbie among others.

Throw together a little bit of old fashioned horror story (think King Kong meets Swamp Thing mixed with a bit darker Edward Scissorhands and add a good helping of Tremors). Give a good splash of espionage and mystery, then a large dallop of geek. Throw in parent/child angst along with good old fashioned adventure and you have NANO.

You have subscribed to alerts for Bion Smalley.

You have been added to Bion Smalley's favorite list.

You can also sign-up to receive email notifications whenever Bion Smalley releases a new book.