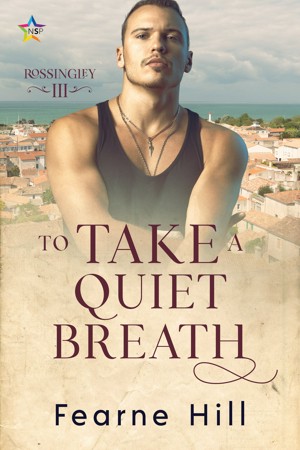 To Take a Quiet Breath

Rated 4.00/5 based on 1 review
To Take a Quiet Breath is a slow-burn romance because Marcel is too breathless for a romance at any other speed. It’s about two men finding that love can quietly creep up on you no matter how many obstacles are thrown in its path and discovering that as long as an inhaler is readily at hand, anyone can swing from the chandeliers. More
This isn’t a romance about chiseled, lantern-jawed college kids boasting V-cut abs. There are no marathon steamy sex sessions, not without having at least one nebulizer on standby anyway.

Marcel Giresse, the thirty-six-year-old Director of Finance at the French Ministry of Justice, is happy to leave all that nonsense to his oldest friend Lucien, the sixteenth Earl of Rossingley. In fact, Marcel is too short of breath and too set in his nerdy ways to ever think about sex at all. Which is a shame because the prisoner serving a sentence for murderer that he’s just interviewed is smart, intriguing, and hot as hell.

Guillaume Guilbaud is approaching forty and has wasted his best years rotting in a prison cell. The only interesting thing that has happened to him since his best friend Reuben was released is taking part in a series of interviews with a disarming and charismatic civil servant named Marcel. As if that friendship could ever materialize into anything, especially as he feels so ill-prepared for his imminent life on the outside.

But after a chance meeting at Rossingley, Guillaume finds himself renting Marcel’s annex and desperately falling for his sweet, chronically ill landlord. Which is crazy, because Marcel is celibate, posh, clever, and fundamentally out of Guillaume’s league. Furthermore, Marcel also has far too many interfering friends and concerned relatives determined to ensure he doesn’t become any more attached to the mysterious ex-con he’s shyly let into his life.

To Take a Quiet Breath is a slow-burn romance because Marcel is too breathless for a romance at any other speed. It’s about two men finding that love can quietly creep up on you no matter how many obstacles are thrown in its path and discovering that as long as an inhaler is readily at hand, anyone can swing from the chandeliers.
Available ebook formats: epub mobi pdf lrf pdb txt html
First 20% Sample: mobi (Kindle) lrf pdb Online Reader
Price: $5.99 USD
Buy Add to Library Give as a Gift
How gifting works
Create Widget
Tags: romance family drama gay lgbt contemporary ex con friends to lovers slow burn
About Fearne Hill

When she is not overseeing her small menagerie, she enjoys writing contemporary romantic fiction. And when she is not doing either of those things, she works as an anaesthesiologist.

Reviews of To Take a Quiet Breath by Fearne Hill

This is my favourite book so far in this series.

I loved Marcel Guillaume both together and separately. The banter between the two, especially early when they first met was fabulous. I enjoyed that Guillaume never once complained about his sentence. He owned what he did and took the punishment. I also liked that Marcel never once talked down to him, he was treated as an equal from the very start. The friendship that blossomed was entertaining to read.

Marcel's illness was also done well. I don't know a lot about it, but it felt well handled to me. The fact that people got up in his life he accepted and while it frustrated me and him at times, he handled it with class.

the secondary characters were all great, I especially liked Dominic and was very happy for him when he found someone that could actually see him.

You have subscribed to Smashwords Alerts new release notifications for Fearne Hill.

You have been added to Fearne Hill's favorite list.

You can also sign-up to receive email notifications whenever Fearne Hill releases a new book.