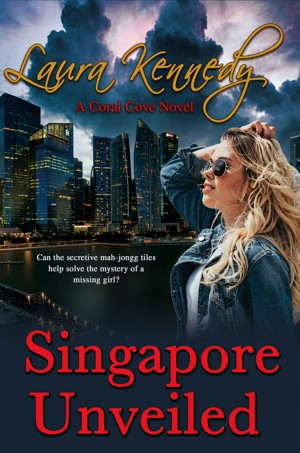 By Laura Kennedy
The ancient game of mah-jongg is sort of like life, each ivory tile a clue, a direction to take, a season of the year or even danger ahead. I realize now I should have paid more attention the months I was in Singapore. I should have sensed something ominous from those exotic designs warning me about Summer and her little sister Plum. But being me, I had to find out the hard way.
Available ebook formats: epub
Price: $2.99 USD
Buy Add to Library Give as a Gift
How gifting works
Create Widget
Tags: fiction suspense mystery friends high school asian kidnapped
About Laura Kennedy

LAURA KENNEDY lives in Tarpon Springs, a Greek sponge fishing town on the West Coast of Florida. She grew up in Minneapolis where her mother was a romance writer who helped her father support the family. By the time she was twenty-two, she lived in Southern California, was married, had a baby, and was broke, the perfect Petri dish for the beginning of a writing career. Encouraged by her mother’s writing success, Laura borrowed her mother’s portable typewriter on which she concocted her first story that sold for the staggering sum of $225.

You have subscribed to alerts for Laura Kennedy.

You have been added to Laura Kennedy's favorite list.

You can also sign-up to receive email notifications whenever Laura Kennedy releases a new book.