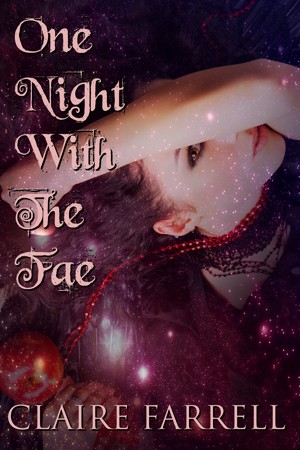 One Night With the Fae

By Claire Farrell
Rated 3.33/5 based on 3 reviews
A group of short stories relating to one event. Each story focuses on a different character's involvement and point of view.

Claire Farrell is an Irish author who spends her days separating warring toddlers. When all five children are in bed, she overdoses on caffeine in the hope she can stay awake long enough to write some more dark flash fiction, y/a paranormal romance and urban fantasy.

Described elsewhere as "a collection of short stories told from a different character's involvement and point of view," this is actually a linear novella in which the POV changes from chapter to chapter. None of it was particularly great. Just a very surface description of some bloody conflict between the seelie and unseelie courts during a fancy ball, with almost no background, engaging characterizations, or engaging dialogue.

I acquired this some months ago, and in the meantime Farrell has released a novel based on it, entitled *Soul*. I believe it was only after the publication of *Soul* that this shorter work was called a "Prequel companion" on Smashwords, and it's not exactly that, as the events described in mirror the events that take place in *Soul*.

In my opinion, having now read two novels and two "short story collections" (one of which actually was a short story collection!) by Farrell, as well as the first chapter of *Soul*, perhaps Farrell should stick to novels. The longer format provides the obviously-needed room to develop interesting characters. *One Night with the Fae* lacks in this area, and pretty much reads like an author's outline for a longer work.

One Night with the Fae is a short story told from multiple perspectives about a girl who gets lured into the land of the fae and in particular one of their parties and how she must escape before something sinister happens.
I enjoyed reading One Night with the Fae. It was a short, sharp story and while there wasn’t much character development you didn’t really need it to enjoy the story.
I’m all for reading about fae creatures and One Night with the Fae was a really fun and interesting look into their world. It’s definitely something that a lover of fae creatures would enjoy.
I thought the story line was really interesting and the fact that it changed perspectives all the time added extra insight into what was going on and it was just a really unique way to show the events of the story unravelling. I’m usually a bit apprehensive about reading books in multiple perspectives because they can often get confusing but this one did it very very well.
That being said, One Night With the Fae was extremely well written and I will definitely be reading more from Claire Farrell.

Very well written and an entertaining story. I love all the different perspectives it provides (and have my favorites and am sure you will, too.)

I had my doubts in the first few pages, but it gets to the good stuff real quick.

I'm definitely becoming a big fan of this author. I picked this up because I'm a huge fan of the author's "A Little Girl in My Room." Both are highly recommended.

You have subscribed to alerts for Claire Farrell.

You have been added to Claire Farrell's favorite list.

You can also sign-up to receive email notifications whenever Claire Farrell releases a new book.