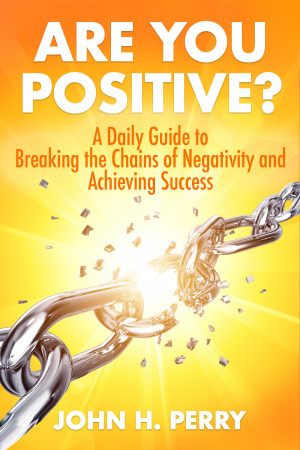 Are You Positive?: A Daily Guide to Breaking the Chains of Negativity and Achieving Success

Today’s world is heavily inundated with negativity and fear from social media, news media, entertainment media, politicians, peers, and other sources. We are so conditioned by our negative, fear-ridden world that we react to each other and to situations with passiveness, defensiveness, and negativity. This book is a daily source of positive quotes and discussions that will help redirect your thinking and attitudes toward always seeing the positive in people and situations in your life.

It is a truism that how you see your world is how your world is. And if you can start taking the positive outlook and positive actions suggested in this book, you will begin living in a positive and uplifting world where opportunity and success abound. Take this book one day at a time and be amazed how quickly it changes your life for the better! At one page a day, why not give it a shot?
Available ebook formats: epub
First 20% Sample: epub
Price: $4.99 USD
Buy Add to Library Give as a Gift
How gifting works
Create Widget
Tags: selfhelp how to be positive book of quotes and sayings inspiring quotations book life goals planner life lessons book personal transformation book self improvement and motivation for success self motivation book uplifting affirmations
About John H. Perry

JOHN H. PERRY is a retired US Army Infantry Officer and a Vietnam War veteran. Despite dropping out of high school, he went on to graduate magna cum laude from college and at the top of his class in Infantry Officer Candidate School. In addition to a long career in the Army, John has owned his own company, worked training US postal service workers, and dedicated his time to a homeless ministry. John has been happily married to his wife, Patsy, for over forty-three years. He considers Patsy his greatest asset in life. Together, they have achieved beyond the dreams they had as children and are still dreaming big and achieving big today.

John’s attitude in life has been one of positivity and challenging established norms. If someone says to him, “You can’t do it,” John will attempt “it” to see if he can. Everything John writes in his book Are You Positive? he believes and practices in his life. John and Patsy came from backgrounds that gave them less opportunity for success by societal standards, but they were determined to achieve beyond society’s expectations of them. Their boldness and self-confidence have allowed them to accomplish things people never believed they could. The tenets of Are You Positive? represent the daily habits and outlook that have served John and Patsy well in their lives and will serve the book’s readers well in their lives, too.

Reviews of Are You Positive?: A Daily Guide to Breaking the Chains of Negativity and Achieving Success by John H. Perry

You have subscribed to Smashwords Alerts new release notifications for John H. Perry.

You have been added to John H. Perry's favorite list.

You can also sign-up to receive email notifications whenever John H. Perry releases a new book.